How am I feeling?

I don't know what happened exactly, but I went from crying several times a day, every day, to being inexplicably cheerful and optimistic all the time. Also I now only need 5-6 hours of sleep, am never hungry, and suddenly love going to the gym, where I run faster and faster all the time. also, I can feel my blood tingling. 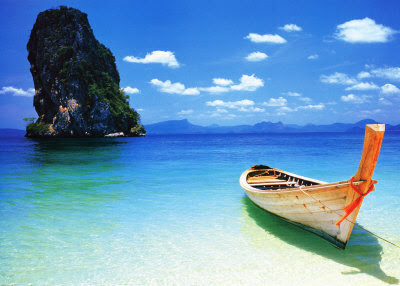 Along these lines, yesterday while watching the US championship on ICC, I semi-randomly invited a friend of mine to go to Thailand with me in August (I have a free week in a resort there-- long story), and he agreed pretty much immediately, so five minutes later I'm booked on a vacation to Phuket! It's been years since I traveled (after a somewhat bad experience going to Egypt for a week by myself. They don't like the 'unchaperoned' women there at all-- I swear I was dressed super-modestly: long skirts, scarf on my head, etc. but in this world, 3/4 length shirt sleeves makes you a dirty whore. Someone actually threw stones, ok pebbles, at me one evening. I spent 4 days in Cairo--a disgusting ashtray of a city, but then took the train to Alexandria, which was breathtaking. A room with a sea view and balcony was $15 a night (ok, no private toilet, but large balcony and free breakfast). I went scuba-diving (first time!) in the harbor and saw the underwater remnants of the lighthouse that fell in the 14th century. But I wouldn't go back by myself, that's for sure. I hardly spoke to anyone all week and no one spoke to me (except for men in the street who would call out "gazelle, gazelle!" -- at first I was looking around, like "where's the gazelle, I want to see the gazelle too!" but hilariously, it's a common pick-up line there, as in "baby, you are as beautiful as a gazelle"). the whole thing turned me off traveling until now.) 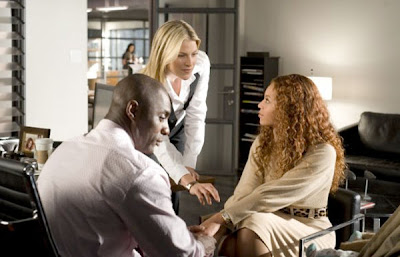 Also, on Friday, I took the girls on my chess team to see Obsessed. Terrible movie, but they all loved it (big Beyonce fans!), and I pretended to. Ostensibly, the trip was a "reward" for winning Girls Nationals, but in fact it was the suggestion of my assistant principal, Galvin, who thinks I need relate to the children better on non-chess levels. I don't really want to watch bad movies with teenage girls, but I thought the evening was a success and will do it again at the beginning of next year, only because the girls seemed to really enjoy it and bond with each other. It's important that they bond.
Posted by Elizabeth Vicary at 7:37 PM

If you have major swings in mood - really big peaks and valleys it might be worth seeing professional counseling.

Could be seasonal affective disorder. This winter seemed particularly long.

About going to the movies with the girls, have you read The Believers by Zoe Heller? Just came out recently in hardcover.

Hi, Elizabeth. Have a great vacation. Just remember, neither highs nor lows last. What persists, immutably, is the inner-self, the soul. And your shoe collection.

Mood swings can be a sign of a depression. I hope not, but a visit to the doctor can help.

Hey Elizabeth...?bipolar disorder - increased energy, lack of sleep, impulsivity, elevated mood - may be worth checking out with a doctor...I know from personal experience with a friend that didn't turn out well, because there was a delay in diagnosis. And it's very treatable...

Here's hoping the explanation for the mood swing is not so sinister. So how's the dance dance revolution thing going? Getting any endorphins from that?

"What persists, immutably, is the inner-self, the soul."

You don't think your inner self changes?

Hi, Elizabeth. I guess I was thinking of the inner-Self (capital S), that's beyond one's individual personality, that's the Self of all, that's the Other that is you. Well, it's kind of silly and embarrassing to talk about these things, isn't it?

You mentioned that you were crying a lot. I'm sorry if you were in pain, but I think crying is such a powerful catharsis: I would prefer crying over quotidian numbness (which is how I get through the day).

I admire Elizabeth for writing about her feelings here--it's really brave of her and it keeps us entertained, mostly because her writing is so good and her inner-life so interesting.

I also admire the blog posters who have talked about how mood swings can be symptomatic of depression, and maybe seeing a doctor or mental health professional might help. Speaking forthrightly about that stuff shows real caring.

thanks, everyone. The problem is that when I'm happy I don't want my mood to stabalize, and when I'm sad I don't have the motivation to do anything. Also, I don't want to be numb. but thanks.

also, some great articles in the ny times magazine yesterday:

the president of the maldives is looking to relocate his sinking country (!!): http://www.nytimes.com/2009/05/10/magazine/10MALDIVES-t.html?ref=magazine

It could be that there is no separate independent unchanging soul, just an ongoing flow of relationships.

Could be seasonal affective disorder. This winter seemed particularly long.Interesting to see I'm not the only one who's felt that way. The grass finally turned green a couple of weeks ago; I swear, if it had taken one week longer, I was going to drive off a bridge.

thanks, everyone. The problem is that when I'm happy I don't want my mood to stabalize, and when I'm sad I don't have the motivation to do anything.IANAΨ, but that exact Catch-22 is what stops folks with manic-depressive disorders from seeking treatment all the time. You should consult with a professional. Fingers crossed, it's nothing more than seasonal effects.

So writes an anonymous poster above.

To anonymous: as long as you're being entertained I guess that's what's important.

As for her (or his, but I assume her) contention that it is brave for Elizabeth to read her diary out loud for all the world to hear (or, well, the 20 voyeurs who read this blog), well, I suppose that's one way of looking at it. Another would be that it's kind of pathetic and exhibitionist OR it's a rather serious cry for help. If the latter I would urge you to get counseling before the swings of highs and lows get more extreme and out of control. If it's the former than I urge you to take the advice of Cher as given in the movie Moonstruck. Upon hearing from Nicholas Cage, her brother-in-law to be, that he has fallen in love with her she smacks him in the face, hard, then smacks him again and says, "Get over it!".

When my country is under water, I don't have the energy to look for a flotation device.

I'm the one who wrote about admiring Elizabeth for writing about her feelings. I'm a guy. So you might want to examine your assumptions.

You might also want to examine your rhetoric, which you marshal it would appear, for the sake of being mean. Quoting a cliched line from "Moonstruck" and invoking the likes of Cher and Nicholas Cage--very impressive.

I am a fan of this blog. I can't help but point out, another possible explanation for the whole mood swing thing -- language. Elizabeth (the writer?) has a sometimes charming sometimes misleading habit of speaking in superlatives -- I don't remember specific examples, but stuff like "the funniest commercial ever" pop up with regularity. Language use/misuse can definitely play a part in destabilizing language-related things (like psychology). I'm not saying that other stuff was wrong. Just pointing something else out. To wit, I find this blog to be a great example of what blogging can be -- an entertaining intersection between the professional and the private.
I.

"You might also want to examine your rhetoric, which you marshal it would appear, for the sake of being mean. Quoting a cliched line from "Moonstruck" and invoking the likes of Cher and Nicholas Cage--very impressive."

Whats worse is he even got the quote wrong. Its "Snap out of it!" not get over it.

Also, is there really any question that it takes courage to post such personal things about oneself in a public forum?

While I can understand how someone might dislike this blog, it's unimaginable how anyone could possibly dislike Elizabeth.
No offense to Cher, Nicholas Cage or any of the characters they've been hired to portray, but in general I shy away from trying to extract any valuable insight from movie dialogues that have been obviously scripted to sell tickets, other than the occasional random observation that happens to fit into a concise (memorable/entertaining) group of words.
I like most of the suggestions on this little blurb called"How to Fight Depression"Even the mostly Catholic, New Jerusalem.com, mentions "long term chemical imbalances". Normally I attribute unusual mood swings to chemical imbalances & the three most likely culprits are diet, exercise & sleep patterns. It's much more common for people to THINK they "only need 5-6 hours of sleep" than it is for them to actually only need 5-6 hours of sleep, but some people (allegedly Margaret Thatcher) may do just fine on less. Coming out of winter into spring in this climate requires a lot less
energy than going the other direction, so that extra energy could reasonably manifest itself as needing less sleep, eating
less & performing better in the gym. If you're getting less sleep & feeling perpetually wired, you may be calcium deficient. My guess is that all that stuff is pretty close to normal in your case. (I'll reserve my professional opinion until after the full physical exam & blood work.)
Probably the biggest danger of "being inexplicably cheerful and optimistic all the time" is the tendency to make impulsive
irreversible decisions that may have far reaching consequences, like moving a pawn. Most of the time I'd think it's just better to be optimistic than pessimistic. The simple solution would be to "sleep on it" of course.

To settle this, I've added a poll! You only have two days to vote! :)

First, it's Nicolas Cage. No h.

Second, Elizabeth, I wouldn't jump to the conclusion that you need to see a psychiatrist. Psychiatrists are MDs and as a community, IMO, are quick to leap at pharmaceutical solutions as opposed to, say, cognitive-behavioral therapy (a relevant consideration if you're worried about feeling "numb"). So while I voted "yes" in the poll, my real answer is that you should see a psychologist first, and let that professional counselor refer you to a psychiatrist if he or she thinks it's warranted.

I have seasonal effective disorder.
I just can't get things done in the summer.

OK, while doing some research to enable me to make a more informed choice for the survey about who's not in the next US Championship, I was looking for a more information on this Giorgi Kacheishvili guy, who just so happens was featured on the April '09 front cover of Chess Life, when I ran into this little tidbit from a NY tournament in which he had competed as a 2700 player. If you scroll down to player number 20, you'll see 1936 rated Elizabeth Vicary, who BEAT TWO MASTERS (Joan Emilio Santana Suarez 2280 & Noah Siegel 2295)! Now there's two games I'd like to see!

I thought you should see a shrink regarding your obsession with Greg's eating habits, not your mood swings. :-)

Even fairly extreme mood swings are only a problem if they impact your life or those around you.... I've seen too many people on prescribed drugs - you can count on your IQ dropping at least five points as you wander around in the typical upper middle class american stupor.

I vote for self medication, the Grandmaster way, preferably in an Irish pub.