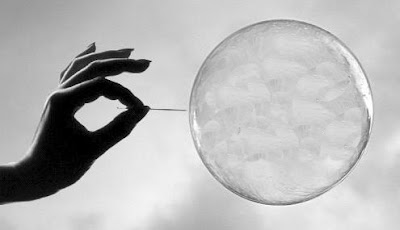 coming up next... economic death bubbles? This way, the next economic crisis will hit when people start dying more slowly than the current models predict. What do you think the remedy for that will be?
If you feel sick now, try a long, cool dose of sanity from Paul Krugman.


In other news, on Tuesday, I'm debuting for Queens and playing my new arch-rival, Tsagaan Battsetseg. I played her once before, in the 2007 US Women's:

The game was summed up by CLO in this way:

"Battsetseg showed off her great fighting spirit with the following win over Elizabeth Vicary. It seemed like a drawish game for a while, but Battsetseg found a way to sacrifice a piece for three pawns and hand Black an extremely unpleasant defensive task."

That really isn't anything close to my impression of the game at the time, but .... let's just say I hope to improve the quality and consistency of my play in our second encounter. 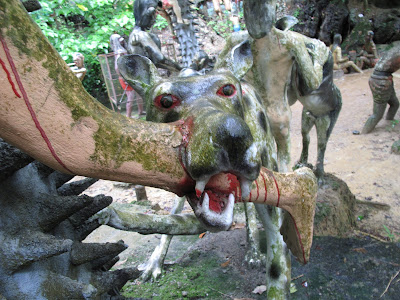 (where I am the fearsome red-eyed dog!) Further, I predict the overall match result will resemble this: 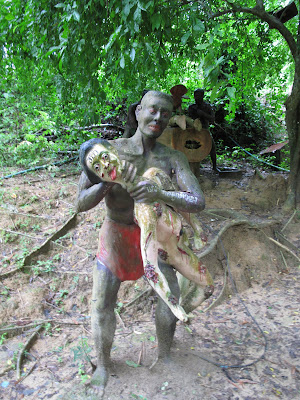 (where Queens is the man of color in the red loincloth!)

Finally, I would like to draw your attention to a bizarro ruling from the US Women's Open in Oklahoma:

for a while it looked like Chouchan would be the only perfect score 2/2. However, her round 1 game, which she won with checkmate, was ruled a draw after round 2 was completed. During that round 1 game, her flag had fallen. But her opponent, Julia Jones, had not kept score since move 32. At the same time, Chouchan kept score (omitting only one move) and was getting far behind on the clock because of the time it took to write her moves. Chouchan's flag fell around move 43. Therefore, the floor TD ruled that Chouchan should get 30 seconds on her clock and Julia should start keeping score. At the end of today (Saturday), however, Frank Berry made what he called a King Solomon decision, and gave each player .5 for the game. This reversed the recorded result of the game, and over-ruled the floor TD's action.

The reporter (Alexey Root) leaves out a couple pieces of important information: the time control is 90 minutes for the whole game with a 30 second increment, and when you have the 30 second increment, you are legally required to keep score the entire game. But even knowing this, do Berry's actions make sense to anyone? If you take the position that the floor TD was wrong, shouldn't Jones simply win?

*sic, although, to be fair, this happens frequently with Mongolians. Anyone preparing for Chimi, for example, needs to look at the games of both Batchimeg Tuvshintugs and Tuvshintugs Batchimeg.

Posted by Elizabeth Vicary at 9:00 AM

I read the Krugman piece (ok, fine, only up to page 4 but I started feeling queasy).

Apparently the economic troubles were caused by an irrational faith in free market laissez-faire capitalism.

One could almost believe this fairy tale, if one had no knowledge of government interference in the economy (which increases every decade, as new regulations are added, and old ones never seem to go away).

It wasn't the free market that politicized the housing market, subsidizing bad loans in order to foster the American Dream and inflating housing values along the way (increased demand combined with easy access to money tends to do that sort of thing...Econ 101). And then, when the actual value of those toxic assets, bought and sold and spread around the financial sectors, became known...the house of cards came tumbling down. I'm shocked, shocked I tell you, that deficit spending is not sustainable.

But no worries, I'm sure the philosopher-kings in DC will pull the right levers, press the right buttons, and captain the S.S Economy back to smooth waters. They just need to guide us, because individuals engaging in consensual trades just doesn't work without central oversight.

Now excuse me while I spend more money than I take in, in order to stimulate the economy...

The bizarro over-ruling made no sense to me. I think the floor TD was right and the checkmate should stand. What's up with Berry?

As for revenge vs. the Batt, try a quick draw - that's sweet revenge.

Solomon would have handled the Chouchan game by declaring that a draw was the fair result and then forfeiting whichever player accepted his decision. That is, if he were following precedent.

also by cutting a baby in half!

Checkmate always ends the game, providing it was preceded by a legal move.

You've convinced me, Anonymous Commenter Without Any Links To Back Up His Assertions! What does Nobel Prize-winning economist Paul Krugman know? What did former Fed chairman Alan Greenspan know last year when he said he made a mistake in thinking markets would always act rationally? Obviously he was just knuckling under to political correctness.

Thanks for setting me straight with your Rush Limbaugh talking points.

It's hard for me to tell if you were just crazy with ...b5 against Battsetseg or if that's a brilliant move. It worked out great, but I still suspect the former. On the other hand, I would have gone Qa6 and in addition I know nothing about chess.

thanks Daniel, I don't know either, but I'm about to annotate the game, so maybe I can tell you soon

I had no idea what the time control was when I read the account. I figured maybe it was 40/2. SD/1 With the claim being invalid due to too many moves missing, you just go onto the second time control, and the mate would stand.

It seems like the floor TD treated the situation as a non sudden death time control and made the other player catch up and gave the other player 30 seconds for the increment. That seems like a reasonable way of handling the situation, but perhaps there is some FIDE interpretation that caused Berry to overrule the floor TD and make the game a draw. Perhaps this would be a good question for the "Ask the Arbiter" column at Chess Cafe.