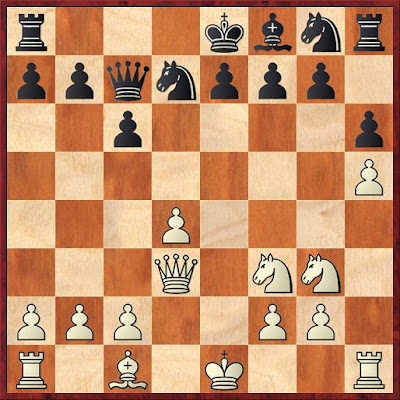 So I switched to the caro a few months ago, but this is my first game in the classical variation. (I've had 1 two knights, 1 advanced, and the rest were panovs.) I teach it to kids a lot though, so I felt I know it ok, plus it's so simple. I'm intending to play the 0-0 lines but haven't learned them well enough yet, plus I know she is a good attacker and those lines are much sharper. I also thought it made sense situationally -- she's supposed to beat me, so it makes sense to be super-boring and see if she freaks out. 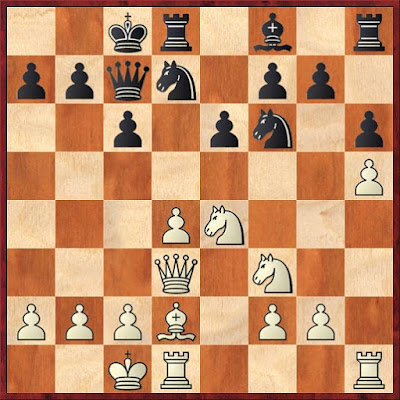 I chose the move order here completely at random, but I guess there might be a slight difference between playing ... e6 first or playing ... Nf6 first, in the sense that with ... Nf6 first you can take on e4 and play Nf6 and when the queen moves it's your turn. With ...e6 first, white has the choice to take you. On the other hand, d3 isn't a great square for the queen, so maybe it's unimportant.

update! I was just looking at a Leko - Anand game which reached this position and the annotator Lukacs says 14. Nxf6 is inaccurate and 14. g3 is better.

14.Nxf6 Nxf6
15.Qc4 I've never seen this weird looking queen move before, but white can't play pawn to c4 with the queen there, so I decided it was time to neglect development and go pawn grabbing with ...Rd5. 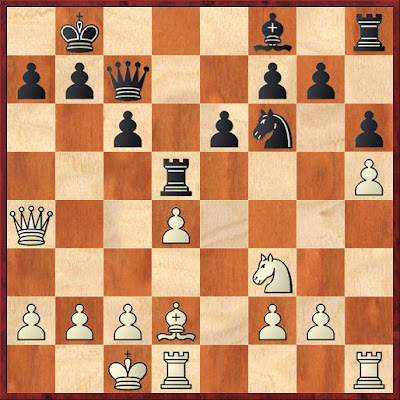 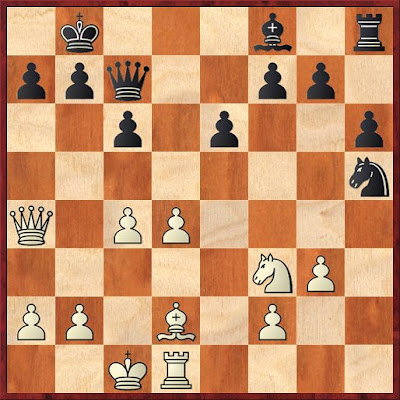 This position is a little annoying for me. Of course, I'm up a pawn, which is wonderful, but I need to finish development and get my knight back from the outer boroughs. Unfortunately, nothing looked simple-- 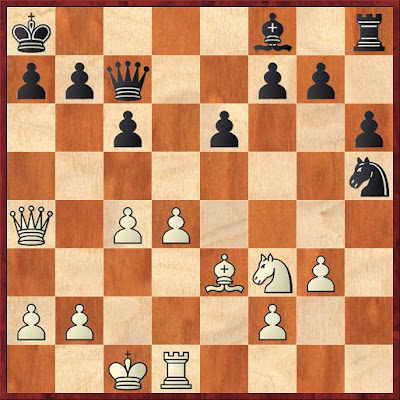 20...b5!? or ?!
Sadly not the best move, but fun. It tries to get me the d5 square, which is of course a beautiful thing, but it's also insanely loosening. I played it mainly out of fear-- I felt like she would play c5 and my bishop would be shut out of the game and she'd do some rook lift and checkmate me. But that's silly because I can simply play ...a6 whenever I want to, which I did not consider. Rybka just wants to play 20... Nf6 or 20... Bd6. 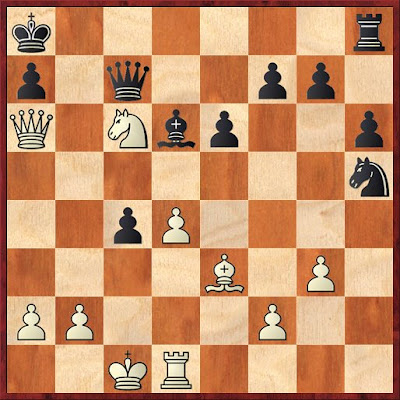 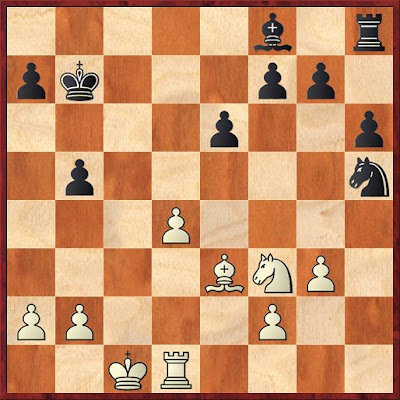 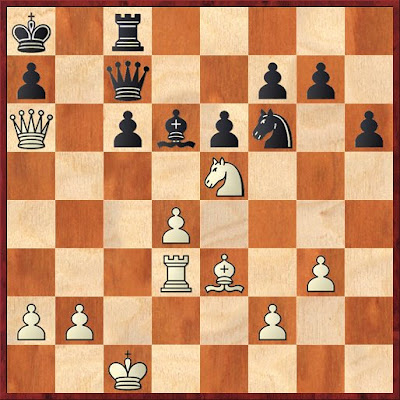 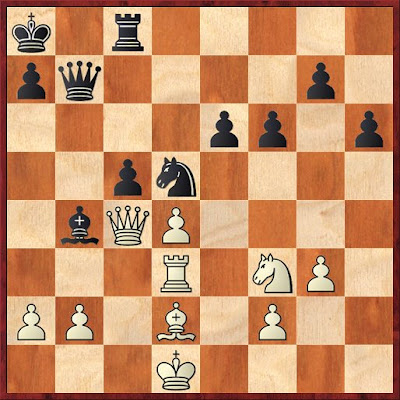 This opens up my rook on her queen, and touches f3 and maybe, in my dreams, h1 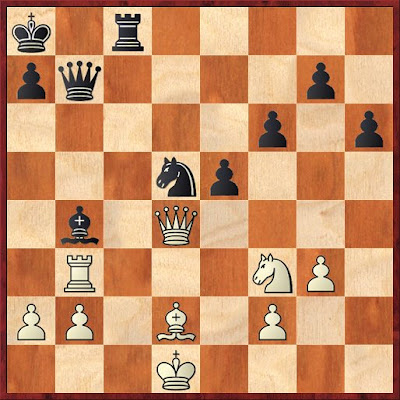 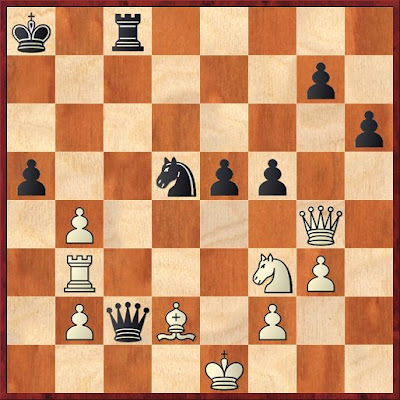 Of course, I hadn't seen that my rook on c8 would hang if I took on b3 instead. So stupid! I went as far as clicking on the queen and hovering it over b3 (I was playing on the computer at this point). It didn't occur to me at the time, but after the game I wondered if I had some touch move responsibility there. If I did, then sorry to Tsagaan and Baltimore! 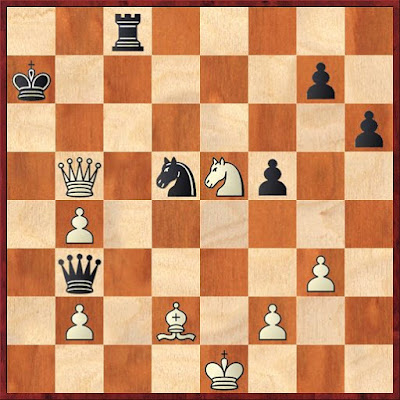 I was somewhat upset to lose this, mostly because I felt so stupid, like I can play openings and early, quiet middlegames, but as soon as anything becomes complicated, I fall apart. It's like I have a healthy little baby, and then I stab it to death. over and over again.

But then I got home and both the computer and Greg said it was an ok game, and it's funny how much this made me re-imagine it. 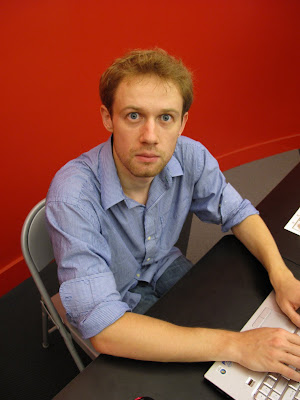 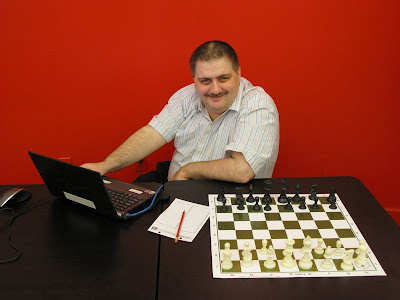 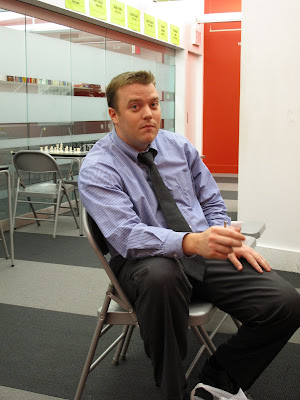 our kind host, and my fellow fourth board and fellow blogger, Shaun Smith 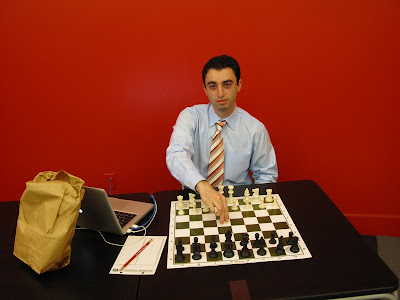 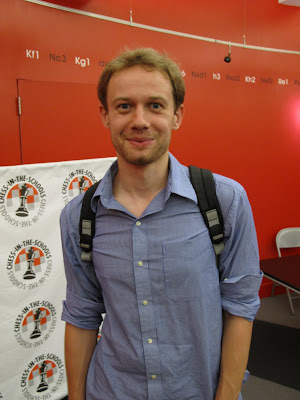 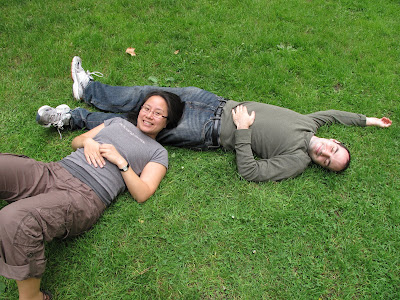 a picture I forgot to include from last post: USCL Commissioner Greg and his girlfriend Susan in the park
Posted by Elizabeth Vicary at 4:19 PM

Don't ever call yourself a choker! Downer words like that have a way of worming their way into your mind and infecting your thinking. I thought you had her there for while. Go get em next time!

The great thing about playing the Caro-Kann is it's always amazing how relatively placid-looking positions can hide spectacular wins or devastating losses within them, like little puzzle-mysteries.

in a rising stars vs experience match, GM Stellwagen blitzed off a zillion moves vs. GM Bareev in a classical Caro, hung h5 pawn on purpose, and got an advantage.

The caro doesn't really seem suited to someone who 'screws up when it gets complicated'. White always gets some annoyingly aggressive attack that is near-fatal, but precise play seems to magically deflect. I think you should play a defense that leads to positions _you_ understand and feel comfortable with.

I think you're too down on yourself. A frustrating game for you in many ways, but you played and did your best.

That Pawn b5 move was a cringer, but so what. Even then you can back to create a good position for yourself.

Keep your chin up.

well, but chess isn't exactly suited to someone who screws up when it gets complicated, right? but I think it may be too late to start my career as a checkers blogger. :(

what I really need is a magical opening that always wins. let me know if you find one.

Here are some magical openings for you.

As Black against d4:

You'll win every time as long as your opponent makes the next to last blunder. :-)

Were there alternatives to 27... c5? Played at that moment, it looks a bit loosening. Especially since Black seems compelled to follow with ...e5 and ...a5, 2 definitely loosening moves.

I think it's not only that the position got complicated, but that Black's position got suddenly flimsy over the course of those few moves- exposed king and unprotected pieces.

Getting one's "knight back from the outer boroughs" -- I like that, being a Queens native.

At least it wasn't out in the suburbs.