the best thing is to win the last round 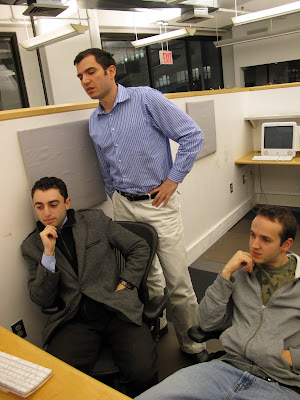 Dmitry Shneider, Ben Katz, and Lev Milman watch Fritz's, Alex's, and Tennessee's games. We had a tiny chance to make the post season if we went at least 3-1 and Tennessee didn't lose to Baltimore. We pulled it off (amazingly almost 4-0!) but Tennessee only managed 1.5. 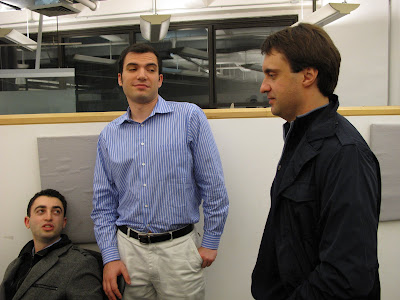 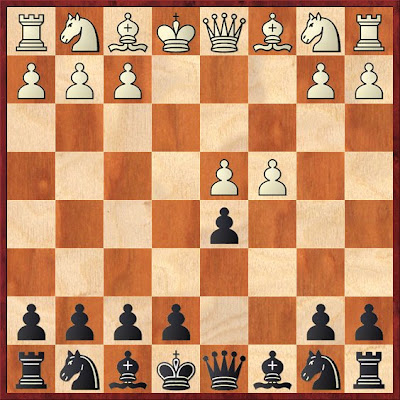 I couldn't find any of Andrew's games against the caro kann, but I figured he played the panov because pretty much all kids do. I like playing against the panov, I score very well, it's probably one of my "highest percentage of wins openings." The only bummer about it is that when you win a game on the black side of the panov, you get no credit whatsoever. It's like white played the game and you just sat across from him/her, facilitating, until at some point in the middlegame the more relevant player conjured up an impressive sacrificial attack that only just didn't work. People say "nice defense" to you, but really they are thinking "That kid will be very good in a year or two."
4...Nf6
5. Nc3 e6 I've been studying the 5... Nc6 lines-- I'm just too chicken to start playing them.
6. Nf3 Be7
7. cxd5 Nxd5
8. Bd3 O-O
9. O-O Nc6 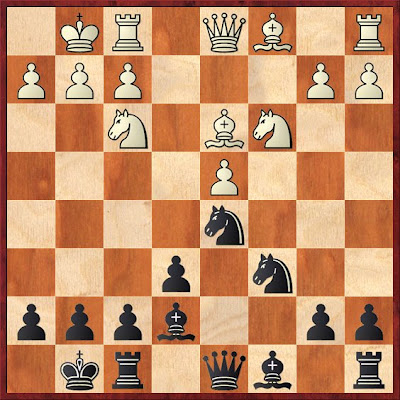 10...Bf6
11. Be4 For a long time, I thought white was kinda threatening to take on d5, to force black to recapture with the pawn. This belief was reinforced by the fact that everyone plays Nce7 here, reinforcing d5. But if you "reference" it, white doesn't usually take on d5 when black makes a different move. Can anyone explain that to me?
Another thing I know is that black has to avoid getting an endgame with bad light-squared bishop and pawn on d5 against knight. 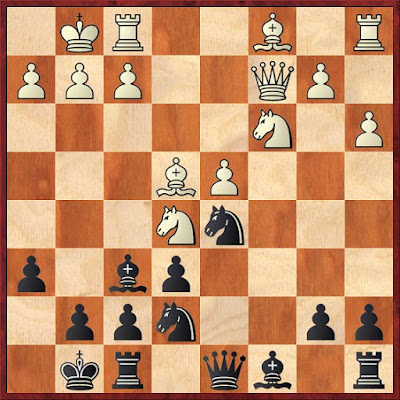 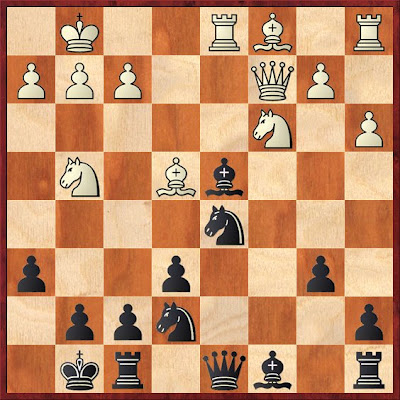 analysis diagram after 15. Rd1
...that things looked very tenuous. Honestly, I didn't seriously consider the computer's favorite move 15... Bxc3, maybe I should have, but on the other hand why would I want to let Andrew Ng (who I know as an energetic tactician) attack me?

So I thought I would develop my bishop this way, because I remembered Gregory Kaidanov talking about this structure at the US Chess School, and saying black often takes back on c6 with the b pawn and gets a great position: the c6 pawn

--is not as weak as d4,
--cuts out any white counterplay with d4-d5
-- defends the knight that will live on d5 in such a way that white can never take, because the recapture ...cxd5 will leave white with a weakness on d4 and black with no problems
-- takes away b5 from the white knight on c3
-- gives black an open b file.

I feel very safe and reassured when I am playing a game and I remember something someone told me about the position (structure). 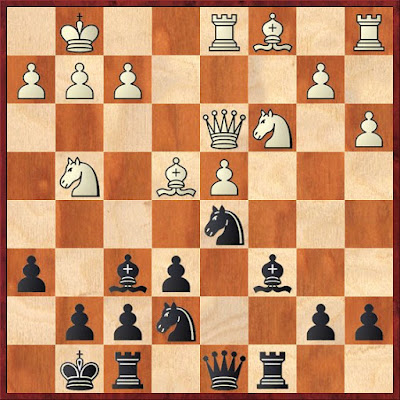 16...Re8 It's not even so easy to move here: my queen needs to stay on d8 to protect the bishop in case white takes twice on d5 and then on f6. My knights don't want to move. My bishops kinda can't. I felt very inert and like a small seed of panic was emerging.

I was starting to feel frustrated with my position, and like I needed to do something before Andrew moved all his pieces to the kingside and checkmated me. The idea of 16... Re8 is to prepare some kind of pawn sac with ...Nf5. It was a vague idea at the time. 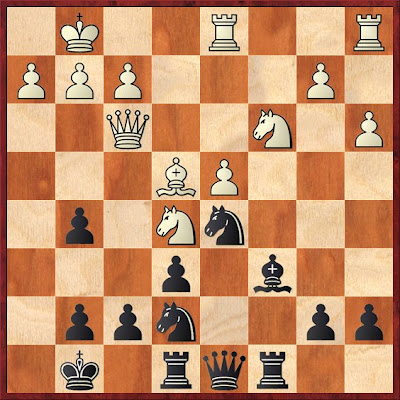 I had 33 minutes here to his 20. I did not want to get low on time, because I panic and collapse like a baby under pressure.

19... f5 was my first instinct, but there was also a strong voice telling me I was insane to give the e5 square to his knight forever. In the cold light of morning, I regret my decision and think 19... f6 would have been a lot more adult of me. 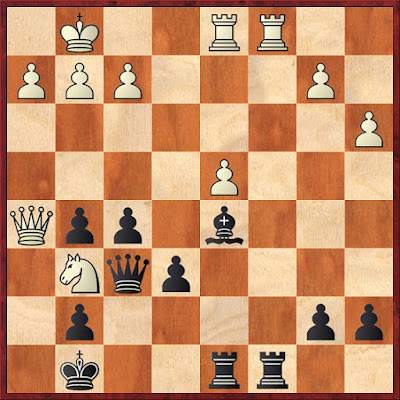 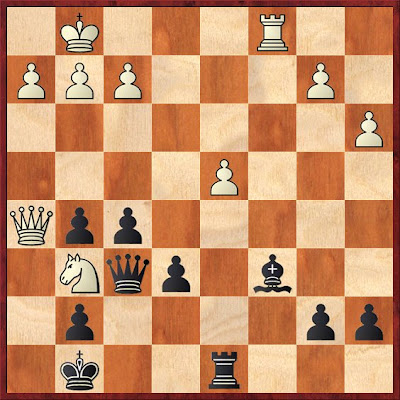 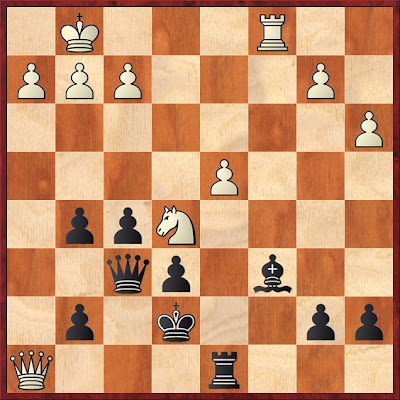 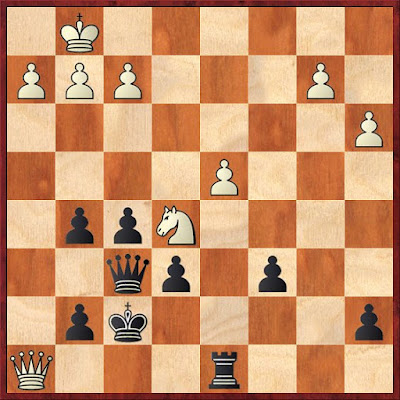 I was so proud and happy to have won this game! Also, Ilya Krasik promised to do an interview with me after I won a game in the USCL, so let's look forward to that!

My teammates had some funny games too: 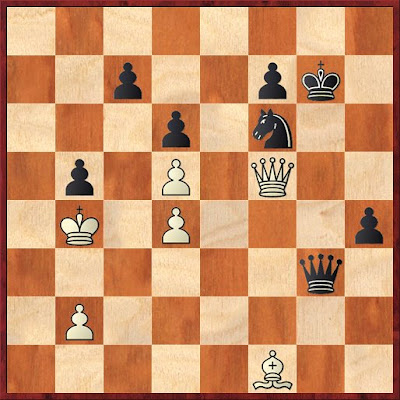 I was watching Strip's game with Dima and Ben and am proud to have suggested 38... Qf4 here, which is actually not as good as Alex's move 38... Qe3, but I think it's prettier. 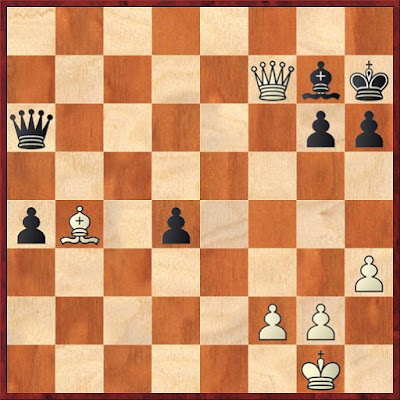 I'm a big fan of Arthur Shen as a player (and was consequently very glad to be on the "safer" board three), but here he made an outrageous blunder with 44... d3. How should white have replied? (answer after next position!) 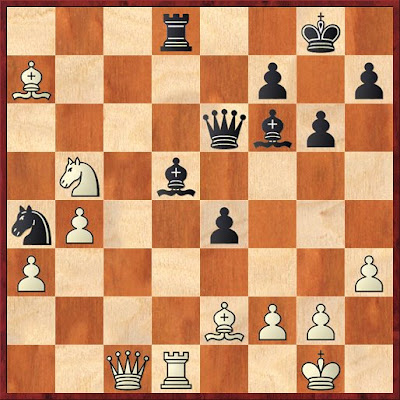 Mackensie Molner is black against Lev Milman and makes the very reasonable looking move 28... Rc8. Why is it actually a blunder? 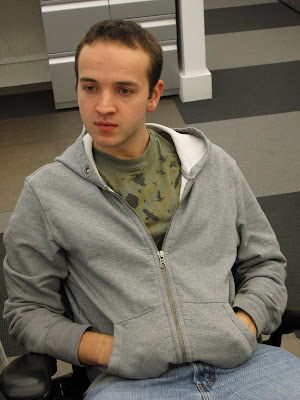 Congrats to Queens on a well-deserved victory! It was an interesting evening for us -- watch for the write up of what went on behind the scenes on the NJKO blog sometime later today or tomorrow.

Good luck in the USCL next year -- root for us in the playoffs!

Geez, Whats the world coming to huh?? Congrats on your first win.

congrats. Re: your discussion of 11. Be4, I am confused for the same reason as you. Some reasoning for the move is perhaps this: 1) the bishop isn't easily pestered on e4, 2) there is a bit extra pressure on d5, 3) it opens up the queen to directly eye the d-pawn

Congrats! I'm not a Caro player, but it looks to me as though Be4 is directed against Black's most natural ways of develop the QB: ..Bd7 drops the d-pawn, and if ..b6 and ..Bb7, then White will take on d5, and Black will end up wishing the bishop was back on the h3-c8 diagonal. Hence 11..Nce7, which facilitates both ways of developing the bishop.

You may not get all the credit for surviving white's attack when you play a Caro, but you had to play pretty precisely to win that. Congratulations!

Congratulations on the nice win.
Also, thanks for the analysis and lesson on the Caro Kann

Gaspard-Shen reminds me a little of this

I know it must be great to notch a USCL win. Also, great play-by-play in this post.

Great going in withstanding a Panov Attack. That's funny about black getting credit in a Panov. I think that even when white wins a Panov in a blistering attack, then white gets less credit than in other lines, because some pundit always says "look, black surely should have known not to play *this*", in describing an error in the midst of a razor-sharp line.

I think you're largely right about kids playing the Panov, but I'd modify the "kids' Caro rule", based on far less observation than your experience:

1. kids 1400 and under play the Exchange, get a slight edge in the opening, win surprisingly often, and prove that this quiet line can be a headache to win against even for Caro Kann players who are much more highly rated.

2. kids 1401 to 2000 play the Panov, score spectacular 20 move wins against 1300s, and score rather less well than the exchange players against stronger competition than the 1400s do.

3. Kids whose ratings move beyond
1. and 2. often have the times of their lives playing various of the sharper forms of the advance with g4 and h4 chase scenarios. I am not sure if they win any more often, but those positions sure are fun.

Times have perhaps changed since my younger days, when King's Indian Attack transpositions were common in Caro and French positions.

hi can you give more analysis of the Molner position? looks slightly complicated? :-)

Well, I'm an IM and it looks pretty simple to me. Maybe you're just a moron?

I didn't want to lose your respect.