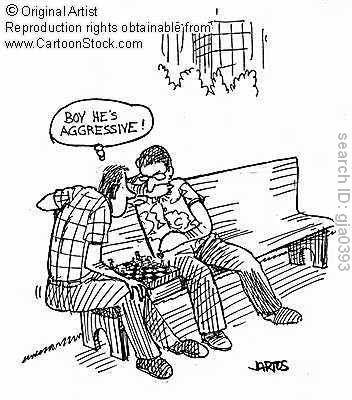 It's the last science post for a bit: Personality Profiles of Young Chess Players
("The present study provides, for the first time, a glimpse at the personality of children who are likely to take up chess. Children who are less sensitive towards others, more prone to arguing and less to avoiding conflicts (Agreeableness), more energetic (Energy/extraversion) and more open to new experience (Intellect/openness) are more likely to be attracted to the game of chess. Given the competitive and aggressive side of chess (e.g., Mazur et al., 1992), the finding that children who score lower on Agreeableness are more likely to start chess seems reasonable. Chess is a game of constant conflicts where each side tries to overwhelm and out hustle the other. This aggressive component may also be one of the reasons for the gender differences in the participation rates. The competitive component of chess may be more appealing to boys than girls, even right at the start.")

Let me just say that by publishing these studies, I'm not necessarily saying I agree with them (whatever "agreeing with the results of a scientific study" means, maybe it means accepting the constructs and methodology?) I think they are interesting and I thought you would enjoy them. Obviously, I am on some level sympathetic to the idea expressed, or else I find it funny, but it's not like the voice speaking is mine.

In other news, I signed up for an introductory photography class on Tuesday evenings 6-8 pm December -February. And I'm playing against Andrew Ng on board three (!) for Queens tomorrow. I am 4-0 in getting the black pieces in USCL games. (I am 0-3 in the actual games.)
Posted by Elizabeth Vicary at 4:05 PM

Wow. Combine those findings with these maps, and you can see exactly why chess is so big in some places and so nonexistent in others.

Some years ago when I was doing a graduate course, I had an in-office conference with one of my professors. One of the reasons for the conference was that she felt I was challenging her too much in class. Afterwards she wrote a note to me saying,
"I had the feeling that our conference was like a chess match, which is not my preferred mode of communication."

Little did she know, . . . Or perhaps she was very perceptive, or maybe I'm just a disagreeable person.

I've not thought you had "religious" belief in any of your posted studies, but thought instead they make good conversation pieces, which, after all, is one point of a weblog.

I like the Swedish twee pop singer Hello Saferide. I like something she said about how none of the characters in her songs are her--they're all stories to tell. There's something to that, I think.

The question in my mind, though, is whether you will play Andrew Ng with agreeableness, or with energy, extroversion, and an open-ness to new experience?

I hope you get a great Caro position, out-last his attack, take a positional initiative, and score a full point.

I'd love to take a photography class--must find the right one at the right time and do so.

Really not surprising. Despite the desire of some to see chess as an abstract intellectual activity, tournament chess is a struggle, an argument, to put it nicely. If you don't thrive on the pressures that that involves, you not going to stick with competitive chess playing.

Chessplayers seem a diverse lot in terms of the kind of work they do, but I'm never surprised to see lawyers at chess tournaments.

Years ago I heard some pundit say that mathematicians were not as attracted to chess as one might suppose: chess is not deterministic enough for them. Interesting idea, but, of course, exceptions come to mind, e.g. Speelman.

"Years ago I heard some pundit say that mathematicians were not as attracted to chess as one might suppose: chess is not deterministic enough for them."

Emanuel Lasker was a mathematician, among other avocations.

"tournament chess is a struggle, an argument, to put it nicely."


To paraphrase Carl von Clausewitz,
'chess is a continuation of arguing by other means.'

The studies definition of agreeableness is ‘sensitivity towards others and their needs’. Is this the case? If a friend asks if they look good in an ugly dress and I answer ‘yes’ to avoid an argument, I might be agreeable, but I am not being sensitive toward their needs.

The researchers assume that people who are less agreeable are more argumentative. I disagree :). Some will argue when they disagree while others might avoid conflict. There are examples of the argumentative prodigy such as Fischer but also prodigies who are not drawn to conflict such as Capablanca - who later became a Cuban Diplomat.

It is strange that they primarily relied upon self-assessments of skill for children 8-11 years old. They cite research that backs this method but based on my personal experience with chess children I am suspicious. It would have been more accurate if they utilized tournament results as they later did with the elite subset of rated children.

"Years ago I heard some pundit say that mathematicians were not as attracted to chess as one might suppose: chess is not deterministic enough for them."

Strange that you should mention Speelman but not Nunn, who I thought was more well known for being a mathematician. (He has a cute story in one of his books about a friend not being able to understand even the title of his dissertation)

On the other hand, my sister, who was quite talented, gave up chess because of the frustration of never being able to calculate it all to the end. She became a surgeon instead (low agreeability, but high meeting-your-needs).
:-)

Time for a challenge match between
Queens and Chicago! The extroverted capital vs the neurotic one (according to anjiaoshi's maps)

"The extroverted capital vs. the neurotic one." LOL!

Most mathematicians I know (and I know a few) prefer Go to chess. Maybe they find chess to be not difficult enough.

And, incidentally, Lasker (both Edward and Emanuel) became huge promoters of Go in the U.S. Edward even wrote a book on introductory Go strategy which was one of the first English language books on the topic (perhaps even the first). For anyone interested see here:

Maybe they find chess to be not difficult enough.

Personally, I find go a lot easier than chess. At any rate, I'm certainly far better at it. I think go just suits me better: I have poor persistent visual memory, so I do better at the game in which the pieces stay put than at the one in which they move all over the place; and go often rewards intuitive play, as opposed to chess, which is much more likely to reward raw calculation.

Where are you taking the photography course?