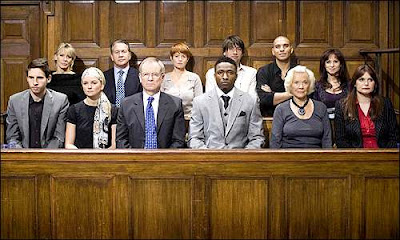 Today I had jury duty at Brooklyn Civil Court. It was fantastic. One woman ran the whole thing and it was kind of professionally amazing for me to watch: every direction she gave was perfectly clear and impossible to misunderstand and represented the most efficient way for the group to complete a task. I was really impressed. Also, it was not unpleasant at all: they had a shelf of free books, captioned CNN, and free wifi. She was so incredibly efficient that most of us got dismissed at 12:40 and had the rest of the afternoon off. I had a 3 hour nap and now feel very calm and happy.
And speaking of this, I had a really terrific experience last time I got my passport renewed. I had lost the previous one in Canada (amazingly, they let me back over the border with only an expired college ID). I needed to get a new one in under two weeks, because I was flying domestically but didn't have any other official ID. But the urgent need for a new passport was complicated by the fact that I didn't have my old passport, didn't have a driver's license or other government ID, and have an English birth certificate that's really just a hand-written note.
I could see trouble coming. But I ended up speaking to some customer service lady at the passport agency who arranged to expedite the replacement approval and send it overnight delivery for about $100 extra, and I had it four days later. On the phone, I almost couldn't believe it was happening.
well done, government agencies!
Posted by Elizabeth Vicary at 6:42 PM

You should put a little something extra in your 1040s next year. As a sign of appreciation for a job well done.

A couple of observations having had served on juries of major crimes (attempted murder, aggravated assault, drug dealer) in Michigan and New York.

1. If you ever have a major criminal charge - do whatever you can to get a good criminal lawyer. It is a universe of difference - the top lawyers are smooth - speak in complete sentences with sharp observations (like watching Law and Order) and the public defenders and less lawyers are often incoherent and disjointed in their presentation - I'm sure there are good PDs but they simply don't have the time to prepare.
2. Jury duty is often a process of frustrating waiting and missing bits of info - whenever you see a sidebar on Court TV remember the jury usually does not know what is occuring - and at the end of the case the members of the jury are often curious as what happened - why a piece of evidence suddenly got suppressed, why we never heard from someone, etc. Usually they are n't told because of a concern it might affect the verdict. When I went to serve - be prepared to sit and wait - the trials don't move along and it can take all day just to enpanel a jury.

My girlfriend is a PD! She is awesome!

There are people out there that become PD's for public service reasons, and don't try to do whatever possible to make the maximum amount of money.

She graduated from Yale Law (top law school in country) and could have had job anywhere but chose the PD's office instead. Of course some PDs are not great, but there are also lots of very bad private attorneys.

Despite that obviously you should pay for a top attorney, because you don't really get to pick and choose which PD will represent you.

Greg Shahade is correct that there are many young and not-so-young lawyers who serve as PDs and who do a very good job. But if one were to face a serious felony charge don't roll the dice with a PD. They don't have the resources to mount any sort of background research and investigation nor the time. Yes, there are a lot of bad private lawyers, but it is quite noticeable from the juries I served on, that there was a marked quality difference between someone who is very good criminal attorney and the typical PD - like that between a GM and a top amateur. Both know the rules and fundamental ideas and concepts, but there was a universe of difference in the court room. (anonymous from earlier on)