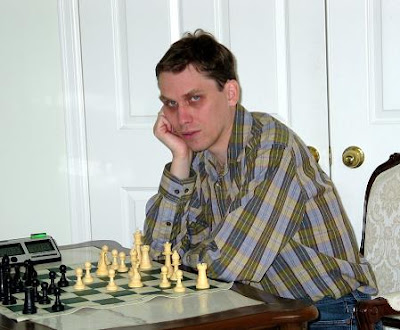 EV: So I have to start with a question about your incredible pawn ending against Kuljasevic in the last round 2 years ago. What an amazing game! Can you tell me a little bit about what you were thinking when you were playing it? How much you saw at the time? When you thought you were winning? Anything like that?

SM: Yes, that was a memorable game. I knew I had to win to give our team a chance to advance. Throughout the endgame I remained optimistic about my position, and kept looking for options. I found the way to trade the bishops, and it was obvious that at least I had good winning chances.

I saw some lines which were published later, not all of them, of course, but I just kept looking and knew that my opponent was under more pressure now that all the sudden the position changed and instead of moving the bishop he had to calculate a complex position.

SM: I didn't see all the lines obviously, but during the few seconds I had for the move I didn't see a clear win after either one. I kept looking though.

EV: And of course the follow-up question is about your endgame with Ginsburg 2 weeks ago. Have you always had this talent for winning drawn endings? Any thoughts about the game? When did you think you would win?

SM: It's kind of similar. I remained optimistic about my position throughout the game. There was one moment (he played a3) when I thought I would be in trouble, but I think he misplayed it and I got an edge

EV: You didn’t answer the bit about whether you usually win drawn endgames. Are you very good at that?

EV: But I think you win more than your share. Agree or disagree?

EV: You seem like an extremely clutch player, someone who comes through in time of desperate need. How sad are you not to be playing in the semi-finals? Do you think you might play in the finals?
And the follow-up question is "Are you furious with the team for their endless ingratitude?"

SM: I won and lost a share of clutch games, so I am not sure if I am a "clutch" player.

SM: I have been playing chess for awhile. Wins are, of course, more memorable. It just adds more value to the win, if you manage. I enjoy playing under pressure.

EV: Name an important match in which you lost and it made the difference. I bet you can't.

SM: lol. Not in team tournaments

EV: I’m awesome. Okay, you were talking about being sad about not playing?

SM: I enjoy playing, and playoff are special, so yes, I am sad about not playing. However, it's a team tourney, and our manager selects the team.

EV: Did you guys talk about it?

SM: A bit. Eddie made a case for the line up, and we went with that

EV: Secretly, you hate him? Just blink twice. I know you must.

SM: lol. Seriously though, the line up is good

EV: Talk me through your expectations for Monday…board one: GM Julio Becerra 2640 – GM Hikaru Nakamura 2742?

SM: I afraid I won't be too original. Hikaru is higher rated, and one of the strongest players in the world. He should have an advantage

EV: Okay 3: Perea is a scary Cuban: Michael Lee is a little boy?

SM: Well, bottom boards have not done too well this season, but I expect that to change. Michael should be the difference maker.

EV: What is that code for?

EV: What's your over under?

EV: You think Lee has a 45% chance of winning? You are insane.

SM: That's how I win those drawn positions.

SM: I would give Andy a small edge, not as big as Michael

EV: So you guys crush Miami by what score?

EV: In the last couple years, you've been relatively inactive in OTB chess. How do you manage to do that and still be good?

SM: I teach chess. Most of my students are beginners, but there are several pretty strong kids, so I have to study to keep up with them.

EV: How strong are they?

SM: Currently my highest rated student is Dakota Dixon. His rating is about 1900. I hope he could join Sluggers within next few years.

EV: Nice. Can you tell us some general things about your life: your age, job, where you were born, how long you've lived in Seattle, who you live with, what else you do besides chess, your favorite book and movie?

SM: I am 37. Over the last 5 years I have been teaching chess full time. Before that, I worked at Microsoft for a few years. I moved to Seattle about 13 years ago. I am married. Have a 3-year old son. My favorite book/movie is Lord of the Rings.

EV: Who's your favorite character?

SM: Frodo.
I play poker a little. I like watching professional sports. My favorite is football nowadays. Before it was basketball, but I don't enjoy it much anymore.

SM: I don't know. May be football is more like chess (turn-based)

EV: That's a great thing to say. Are you good friends with the rest of the Seattle team? Do you have any good team stories?

SM: I can't think of a good team story. Our team players are nice and friendly. We meet at the matches and support each other.

EV: Who's your favorite teammate?

SM: Serper. He is from former Soviet Union. I could relate to him more than to the other players.

EV: Where are you from?

SM: It's a big deal for Larry to win the World Senior. We played once, and I won. That was quite a memorable game for me since it was one of the first games I played in the US against an IM. I was black and won a nice tactical game.

EV: You think he will get any credit for it?

SM: I don't know, but it's a big deal for him at least. He is the World Champion, and that's big. If I play him in the scenario you described, It would be a tough match since he is the world champion.

EV: Wow! Ok, thank you, is there anything else you would you like to express to the USCL community?

SM: USCL is a great place for players like me to stay active and play competitive chess. Kudos to Greg and the sponsors for making this reality. I hope the league will flourish, and Seattle will become the champions.

Posted by Elizabeth Vicary at 9:49 PM

Well Liz. That was a nice friendly interview for once! At least you didn't use the space to stir up controversy like usually do!