When I woke up today, I watched Jon Stewart interview Bill O'Reilly on his show. (parts one and two here). It really made my whole day. I love that he is willing to stand up and say 'actually, Americans are not center-right, and they are not stupid, blood-thirsty voters motivated purely by fear. And the American tradition is the progression of individual freedoms-- gay marriage is the logical next step in that tradition.*' (Definitely watch until the end of part two, when we discover that in addition to not knowing the difference between a loofah and falafel, Bill O'Reilly doesn't know what a panda bear is.)

Below are more pictures of my students from the tournament today. (more here) 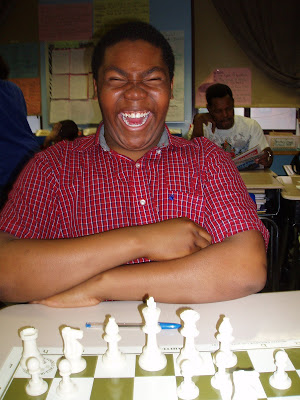 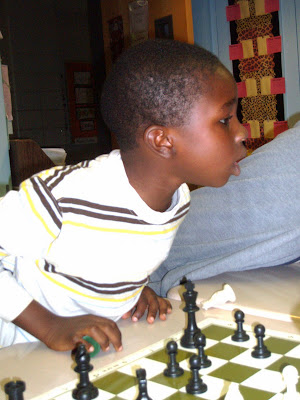 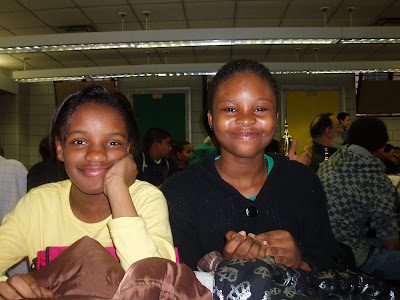 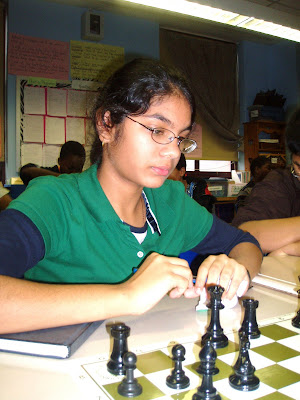 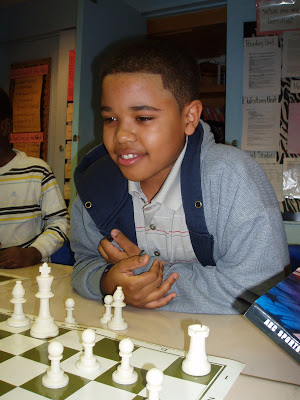 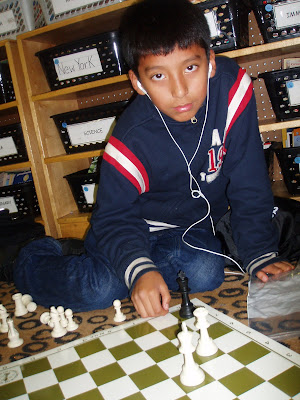 
Pobo shows me his game 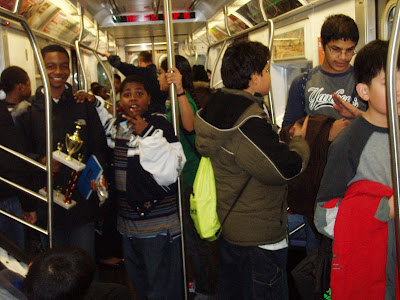 on the train going home

*not an exact quote
Posted by Elizabeth Vicary at 5:28 PM

First of all, I don't think that Stewart's placement of same -sex marraige in the progression of American individual freedoms implies support for polygamous marriage. Clearly, there are some freedoms we do not have. We cannot sell ourselves into slavery, for example. Arguing for liberalization is not identical to arguing for anarchy.

What do I personally believe? I'd have to divide marraige into its legal and ethical components before giving you an answer.

Do I think people who are in long term relationships should be allowed to visit each other in the hospital? Yes! Definitely! In fact, I think we should all make a list of 5-10 people who can visit us in hospital, and that should be what decides this. You can put your family members on the list or not. If Itunes can effectively manage my music library, I'm sure there is some technological innovation that can allow the government to record people's preferences for hospital visitation. Same with adopting children-- responsible, loving, mature people should be allowed to, and crazy people with major psychological issues should not. I don't think sexuality has much to do with the above. In terms of citizenship/taxation issues, I don't know, I don't really believe in the concept of the nation-state, so I'm not about to modify my beliefs about the central importance of love to make it easier to put me in the correct tax bracket.

Ethically do I approve of polygamy? Theoretically, sure, in the sense that I approve of love in all forms. Practically, I have the same problme with polygamy that I have with the sex industry-- in its current form it tends to exploit women economically.

In a larger sense, I think its weird that the government would even try to legislate people's personal relationships. There's an Ani Difrnaco lyric that goes:

same idea here-- I think there's something totally insane about believing you can pass laws that determine who will love who.

these are great photos? did you take them? bob

Thanks! I took all of them except the one of me. Myles took that.

Ms. Vicary, thank you for your response. Firstly before I forget let me touch on your comment on slavery. It is not true that one can not give themselves into slavery, it only seems this way because American taboo and our American fear-based culture of exclusion forces slaves and their masters to live in closet. Some digging, perhaps starting with google-ing "slave personals" (of course this is work-unsafe material) demonstrates that many give themselves into slavery. For some, giving themselves into slavery is the right choice. I have trouble understanding this, but I also have trouble understanding why a man wants to love another man... so if I have made the decision not to discriminate against the latter, how can I possibly discriminate against the former?

But of the topic at hand, I am happy to read that you theoretically are not against polygamy. As you have claimed to be "liberal" in your blog I had mistakenly assumed that you are of the typical American liberal fabric. Often I have found since coming to America that "liberals" are not "liberal" at all, but quite the opposite: they merely follow the trends. Liberals by definition should be broad-minded and progressive, but really there is nothing particularly broad-minded about supporting Obama or same-sex marriage or marijuana-legalizing, for a majority (/significant minority) already does this... if anything I have sadly found that in America "liberals" are quite conservative and are merely indicative of the slightly-left-of-center zeitgeist. You might be surprised how many liberals I have come across who support same-sex marriage but are disgusted by and fervently opposing polygamy.

In reference to your point that in practice, polygamy tends, to exploit women. No offense is meant, but this is akin to one saying in the 1950s that in practice, homosexuality tends, to exploit children. How many polygamist do you know? Of course we all see Warren Jeffs on our television screen, but do you know the MMF couple down the street who have lived in union peacefully for 20 years? Of course this couple remains closeted as there is still quite a stigma associated with polygamy, just as most homosexuals were closeted in the 50s. As someone who has been involved in the polygamous lifestyle in the past, I can attest the fact that the number of polygamists in urban centers is MUCH greater than most believe.

Also, what of the men and women who enter monogamous relationships and try-as-they-might are unable to remain faithful? For years we have called men and women who marry and carry on same-sex extra-marital affairs victims, saying that they were homosexuals who had heterosexual relationships because they were taught that homosexuality was WRONG. Perhaps all/most/some of the "cheaters" are only cheaters because they've been taught that polygamy is wrong? Are such people not victims as well?

PS: I agree that Ani Difranco is an excellent artist!!

I do get what you are saying about the bigotry in the argument. It's a very good point. I need to revise my opinions. I just have a suspicion that most polygamist marraiges are single man and multiple woman, and I feel like that privileges the man?

I do think there is a big differecen between someone who wanted to be a slave and someone who is gay. I don't have a problem with either, personally, but it's possible to make a logical argument that enables you to treat them differently.

There was a NY Times article on open relationships recently:
http://www.nytimes.com/2008/10/05/fashion/05polyamory.html?_r=1&scp=2&sq=open%20relationships&st=cse

A very interesting link. Thank you for showing that.