wow, I stop paying attention for a summer, and the whole Polgar USCF thing goes wild.

First, the Executive Board revokes Polgar and Truong's memberships for ethics violations, which will cause them to be automatically removed from the Board after 30 days. It seems to me that this is a very weird way to remove them, but assuming lawyers were consulted and it's not completely illegal, I guess we passed the point of niceties a while ago.

Now, Polgar's webmaster, Gregory Alexander, has been arrested for his part in this. Check out his order of release. I've never seen one before. 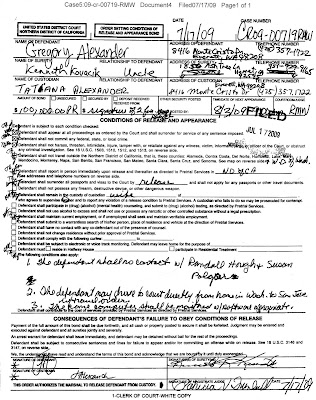 In other news, if you haven't been checking out Pogonina's website, you should. She/Peter do a great job, updating all the time, good stuff.

If you've stopped checking the USCL site because it's so dead in the summer, time to start again! I think I'm being funny in the discussion of "Female Rules" (who titled that one?), but it's possible I'm the only one who's amused.

Finally, I notice that the first round USCL match-ups include Queens - Boston. Are you thinking what I'm thinking?? 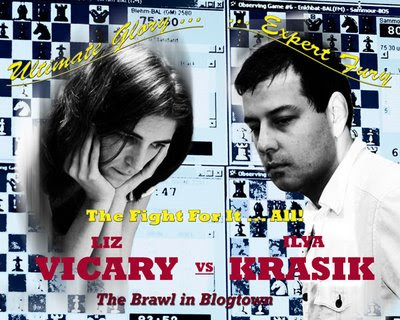 ( Tony Cortizas, Jr. originally made the poster for the Boylston Blog)

finally, finally, an article on the kids from the US Chess School.

ok, I know, but Krugman-- wow, he has enormous balls, it's like the antithesis of Obama's tact:

So what do the Blue Dogs want?

Maybe they’re just being complete hypocrites. It’s worth remembering the history of one of the Blue Dog Coalition’s founders: former Representative Billy Tauzin of Louisiana. Mr. Tauzin switched to the Republicans soon after the group’s creation; eight years later he pushed through the 2003 Medicare Modernization Act, a deeply irresponsible bill that included huge giveaways to drug and insurance companies. And then he left Congress to become, yes, the lavishly paid president of PhRMA, the pharmaceutical industry lobby.

One interpretation, then, is that the Blue Dogs are basically following in Mr. Tauzin’s footsteps: if their position is incoherent, it’s because they’re nothing but corporate tools, defending special interests. And as the Center for Responsive Politics pointed out in a recent report, drug and insurance companies have lately been pouring money into Blue Dog coffers.

Posted by Elizabeth Vicary at 1:49 PM

Daaaang,
Where do you get this breaking news, girrrl? You on the INSIIIDE !

just the inside of the USCF issues forum.
:)

In case you were wondering, here's the deal on the membership revocation. It takes a 2/3 majority of the delegates to remove Polgar and Truong as Executive Board members. It only takes a simple majority to revoke their memberships.

This year, I predict that we will easily have a simple majority, as disatisfaction (read: disgust) with Polgar and Truong has grown sharply over the past year. The election was won sharply by the Berry/Goichberg slate (62%) and Polgar supporters were a bit of a fringe element at 15%. And that's including votes for Mike Nietman, who was kicked off the Polgar endorsement list for having the guts to oppose the lawsuits!

Not too nice of them to post the guy's address. You think they would have had the sense to redact that.

Oh wait, I'm talking about the USCF, not some national organization that should have a reasonable degree of common sense.

This might be a first, a corporate espionage arrest in a non-profit organization.

The delegates had their chance to express their opinion last year in Dallas. I voted for the motion, but it failed. What has happened since then to change things?

I think the EB has every right to make another Delegate's motion, but I consider this membership revocation, by the EB, to be beyond the pale.

I think Polgar/Truong are in the wrong, but that is for the courts to decide. They have the right to sue the federation. I don't like it, but it is their right. It should not cost them their membership.

I was a naive board member way back in 1996, but I quickly learned how things worked. As I used to say, every time we overturned a stone there was something ugly underneath it. It has only gotten worse.

To be clear: I think Polgar/Truong are entirely in the wrong. I think stripping their memberships is complete BS.

What is the point of maintaining memberships and retaining executive board positions when they sue their own organization? Are they going to cry over it when they lose their memberships and EB positions? If they are right, they should prevail in their lawsuit against the USCF.

Until then, the membership has largely spoken. It's now up to the delegates.

"It takes a 2/3 majority of the delegates to remove Polgar and Truong as Executive Board members. It only takes a simple majority to revoke their memberships."

I can't wait until Krasik kicks your ass, Liz. Go ahead, delete this post, but at least you'll read it and know that one Boston fan has gotten into your head.

@Elizabeth Where is the URL for this issues forum that you mention?

And: Why does Elizabeth's post say that the EB *has* revoked their memberships, but Juanito seems to be saying that now the EB *can*?

@ Jim Eade: Well, if the Polgar/Truong lawsuit succeeded, they would have lost their memberships anyway, because the organization would cease to exist. And if they lose the lawsuit(s), obviously they'd lose their membership also.

Don't get your knickers in a twist just because the USCF has speeded up a development that Polgar/Truong's own actions have made inevitable.

P/T aren't making any kind of contribution as board members; they're just using their positions to further jerk things around. They've acted in stunningly bad faith from their initial lawsuit on forward. If you can't remove people under such circumstances, my goodnes, when *can* you?

"If you can't remove people under such circumstances, my goodness, when *can* you?"

When they violate the written terms of the relationship, but if they protest, then only after an arbitrator or court says so. Or in some cases, you can do it, but then must re-instate them, if so instructed.

Firing someone for suing their employer is illegal, which may be relevant to this situation, albeit it is probably not "employment" per se.

Using a creative or complex manoeuvre to achieve an illegal goal is not looked upon kindly by the legal system.

Besides commiting a number of unethical and possibly illegal actions, the lawsuit by Polgar/Truong against USCF is the worst. It is frivolous, has no substance and clearly meant to scare USCF folks from doing the right thing and to stop investigation of their dirty deeds. Complaining that TTU was informed about truong bankruptcy is ridiculous as it is a fact.

Even bigger villian is the one financing their lawsuit.

Mr. Paul Krugman is rich, lives in your town and has (in your words) enormous balls. I would suggest you get a 2D:4D check and if that ratio is acceptable, the entire Mr. Right checklist is filled!

Here is the US Attorney's Office press release:

@Anonymous from this afternoon
>"If you can't remove people under such circumstances, my goodness, when *can* you?"

>When they violate the written terms of the relationship, but if they protest, then only after an arbitrator or court says so.

Well, I don't know what the exact wording of the board's responsibilities is, but in general a board is supposed to help the organization continue to operate.

Suing the USCF for several times its net worth is (putting the very best possible face on Polgar's actions) either (a) an attempt to bankrupt and shut down the USCF or (b) extort a settlement from it via the threat of (a).

And for what? Absent evidence that the "Sam Sloan" postings did several million dollars worth of actual monetary damage to Polgar's businesses, the only damage is to her ego.

Are you saying that because the USCF bylaws didn't specifically name the current scenario as something that board members aren't allowed to do, the board is enjoined from kicking her out because of it? Are you saying that anytime a board member dreams up some sort of misbehavior that's so creatively ludicrous and/or outrageous that it's not in the bylaws, that person is home free?

Our legal system does have an "innocent until proven guilty" foundation, but that doesn't mean that we can't lock anyone up while we're trying to prove that their guilty -- as Mr. Alexander already found out.
The board has locked P/T out of the EB -- not that they've been attending meetings of the board, much less acting productively within it, for quite some time. It's a comparable (and much more lenient) measure.

As I've said previously, I think Polgar/Truong are wrong to do what they have done. Two wrongs do not make a right.

The USCF has a recall provision in its by-laws for just this sort of contingency. (Also, we might start to think that 4 year terms are too long. We really don't know some of these people, and a four year commitment to them is crazy.)

Once you set a precedent for revoking memberships it is hard to avoid subsequent abuse. People can seem wildly unpopular at one particular point in time, and be proved correct later on.

There may be some legal tactic behind this development, that I do not comprehend, but I consider it to be reprehensible.

On the dubious removal methods, I share Jim’s concern for basic rule of law and due process, but that does have to be balanced against how unfucking real their behavior is/ has been. I think it’s hard to say.

JIm defers to lizzy, who knows all. I have had my say, and will now go do something more interesting.

I don't know if I could ask something - I'm outside the USCF (and indeed the US) and may be barking up the wrong tree, but I was surprised that the Chess Café ran Susan Polgar's long piece a couple of months ago appealing for people to vote for her friends in the elections. I say "surprised" because it seemed to me to be a fairly blatant piece of side-taking by the Chess Café, and not really the right side at that.

Anyway, around the same time I read on an old interview on this site that the USCF either owe, or used to owe, the Chess Café a certain amount of money. So naturally I wondered if these two things were connected.

So what I'm asking is:

(b) in your view is there likely to be any connection between that, and the Polgar piece?