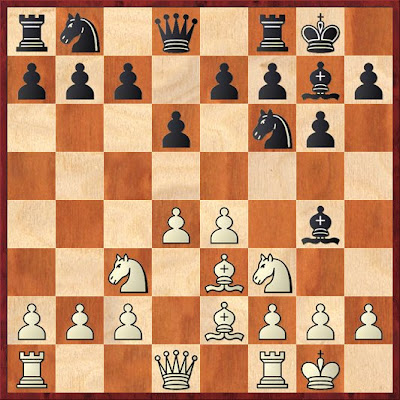 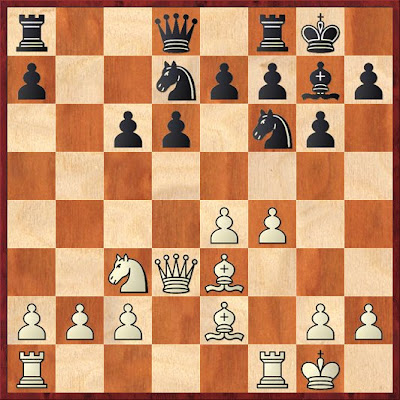 Lucas Zheng played against my kids when he was in 3rd grade, by the way. Now he's my height.

9...a6 This raises the question: of all the legal moves, which is, on average, the best? I was at a very very large dinner table at Friday's, back when the World Open was at the Adam's Mark (oh the memories. on this topic, does anyone remember in the mid 90s when the fire alarm went off in the middle of the night and everyone came out in their pajamas? that was my fault.) and someone (I think Jenn) proposed looking at many games to determine how frequently bad moves were made with different pieces. For example, perhaps king moves are more likely to be mistakes than rook moves? I'm not sure what the larger point of the discussion was, but it quickly degenerated into a dispute about whether castling should be in its own category, or count as a king move or as both a king and rook move.

Jumping ahead 10–15 years, I figured the move a5 for white must be above average. 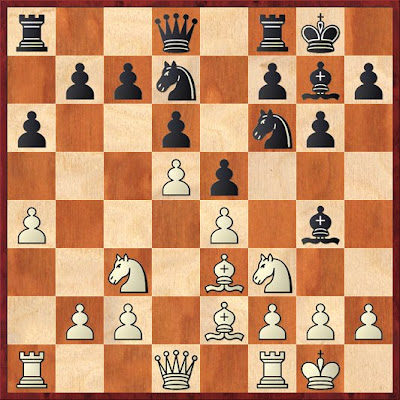 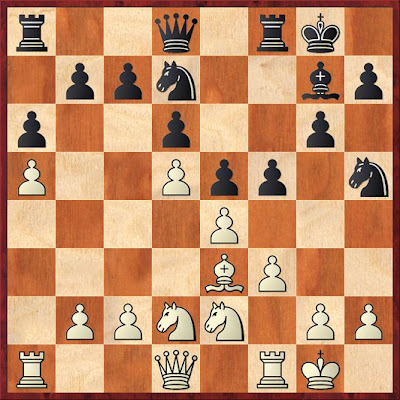 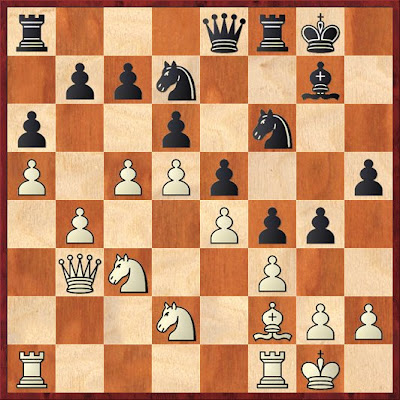 19...Rf7
20.Na4 again, I thought for a while and then panicked and chose something randomly. the main idea of this move is that my queen now defends f3 so the Nd2 can go to c4. 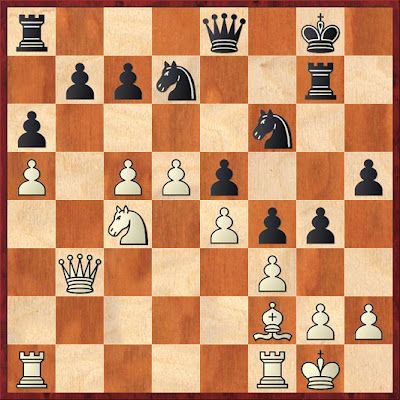 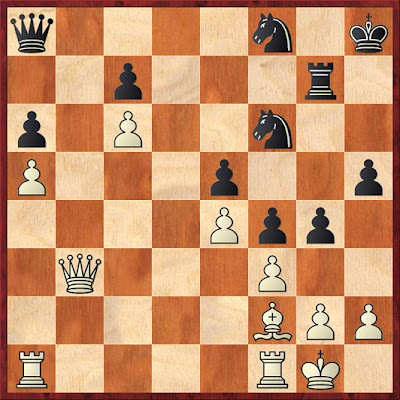 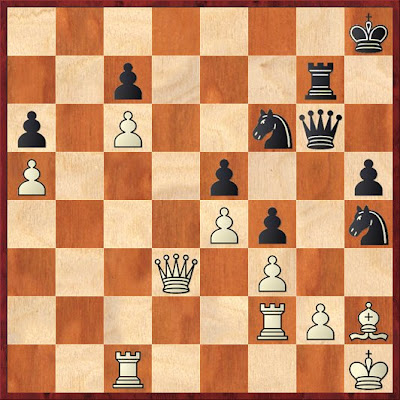 
On a side-note, the Manhattan Marauders* (formerly the Queens Pioneers, but really, what kind of a lameass, silly name is that?) team captain, Mr. Dmitry (no c!) Shneider, informed me yesterday that the team Stripunsky-Vovsha-Milman-Vicary will be one of his possible line-up choices. Quaking in fear, anyone? I'm afraid this blog will mean I'm the easiest person to prepare for, ever.

*Greg claims** teams cannot just change their name, but I say if it quacks like a duck and plays in Manhattan and also floats, why look in its mouth?


**update: Greg writes to say "teams can change their name, just not 1 month before the season begins."

Posted by Elizabeth Vicary at 3:24 PM

"I'm afraid this blog will mean I'm the easiest person to prepare for, ever."

This is why I believe in not having an opening repetoire. Impossible to prepare against.

Where in Manhattan will the former Queens Pioneers being playing? Marauders sounds more dangerous then Pioneers.

Elizabeth, I appreciate your writing very much. Your pictures are lovely. Your comments are honest. Every day I run through a list of chess blogs. I have yours at the top of the list.

I appreciate how you have been explaining your inner thoughts and emotions during a chess game. It is entertaining. I can relate.

"One question often posed by my students is whether we must simultaniously prepare two or more different systems against an opening. My personal opinion is that only professional grandmasters can afford this luxury. All other chess players should focus on one specific system every time, so as to specialize in it and reap maximum benefit." -Efstratios Grivas from the introduction of Beating the Fianchetto Defenses.

Sooner or later the preparation runs out. I read that most class level games deviate before the tenth move.

Unless one is bungled, the real chess happens in a middlegame that begins moderately level.


As for the narrow-broad opening repertoire, I used to think the way Grivas does, and if I were advising a strong young player I might say the same, but at my (high) age and (low) rating this game will never be anything but a fun pastime for me. And I think it's fun to play different openings.


What's more, I KNOW there's nothing worse than to sit down to a game and go "I REALLY don't feel like playing this opening again, but it's all I know." One day I sat down to play a 2100 player (I was 1600 at the time), and I felt that way, and almost before I realized it I had reached out and played 1.e4 for the first time in 25 years.

I still lost, but it was a long, interesting game, and I was fine out of the opening, in part because I was thinking rather than remembering.

It's funny that you mention this, because I'm forming a chess club, and one of the guys in it plays a fianchetto English (1.c5, 2.g3, 3.Bg2) every single time he has white. I'm trying my darnedest to figure out how to blunt it. I was on the right track the other night, but I stupidly hung my queen and threw away the game.

thanks everyone, esp the old hobbiest club slacker!

And the Executive Board votes are in!
http://main.uschess.org/content/view/9564/141

The breakdown of votes by region is interesting. What constituencies does the "Other" category comprise? I'm particularly curious, because that was the area where Atkins, Goichberg, Berry and Mottershead performed worst, while Hecht, Lugo, Korenman, Lafferty and Sloan performed best in that same category!

Nietman backers must be a powerful force in the upper Great Plains: Goichberg, Sloan and Haring all tanked in region IV relative to their performance elsewhere. Goichberg got his revenge in the New England and Mid-Atlantic regions I and III, where he and his slate stomped the Polgarites.

"Other" does not like Mottershead. At all. As for the regions where he performed more strongly -- the Midwest, Highland South, Mountain West and Pacific Northwest -- I surmise that these were the places where people were least inclined to vote straight tickets.

Lafferty cratered in the Northeast compared with his showing elsewhere. My wild stereotypical speculation: Northeastern voters are the best-connected and thus were most likely to know he'd dropped out of the race. Why did Korenman outperform the rest of the Polgar slate? Probably all the GM endorsements he was sporting.