Puzzles from IS 318 players games: 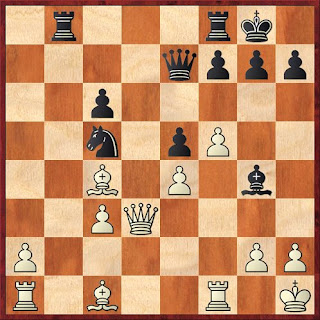 1. Anita Maksimiuk - Kevin Budhu. Anita's queen is attacked. Where should it move and what happens next? 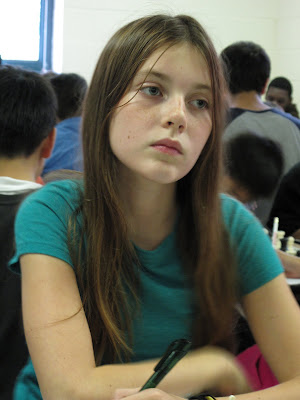 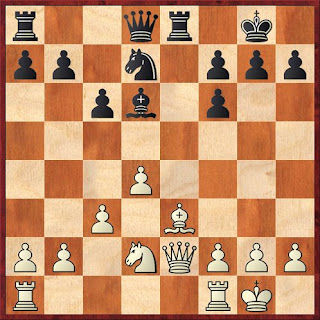 Black played 12... f5, which has the positional idea of controlling the light squares and continuing with Nd7-f6, gripping e4 and d5. Black also sets a trap.

a) Where should white move?
b) White actually played 13. Qd3, getting out of the pin on the e file. What should black play and what happens? 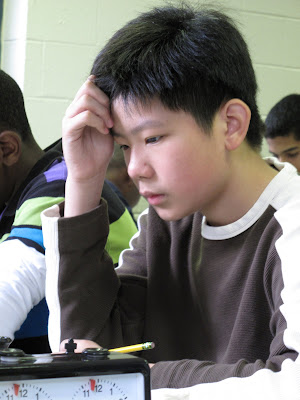 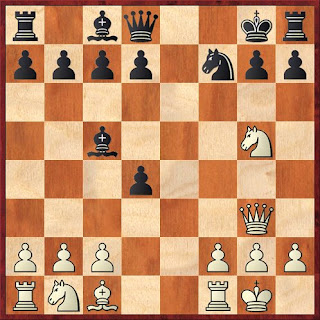 Danny knows his openings very well: until his opponent's last move, 10... Nf7, he was still in "theory." How could he have won immediately here? 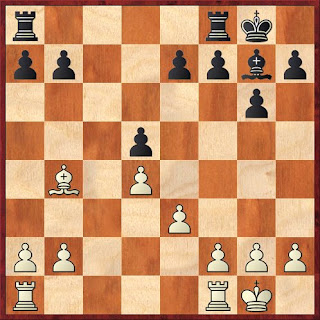 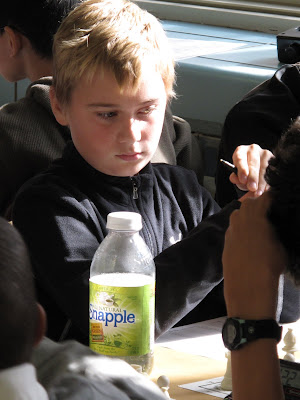 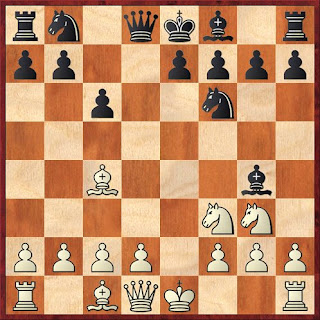 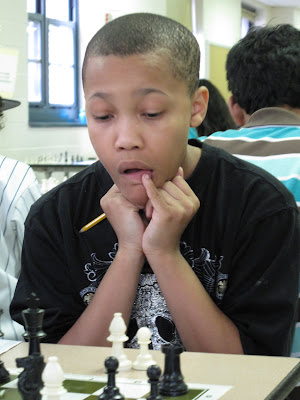 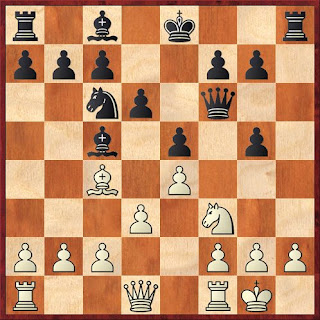 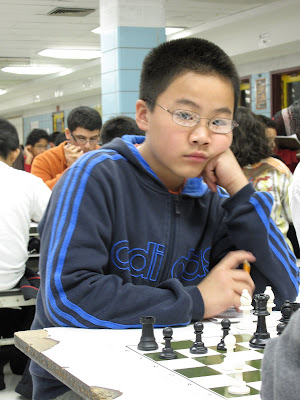 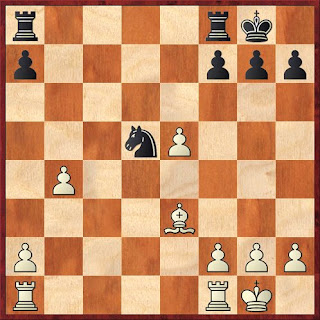 7. Casey Jacobs - James Black
what to take? black to move 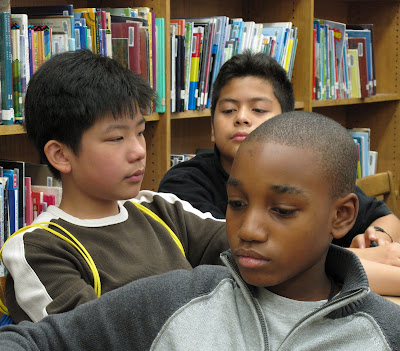 James, Danny, and Anthony (front to back) 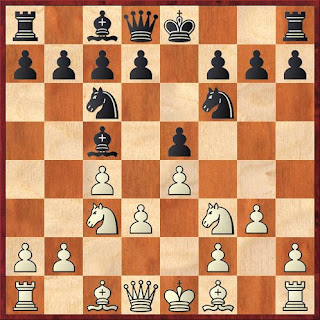 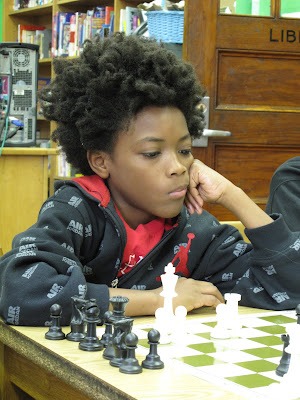 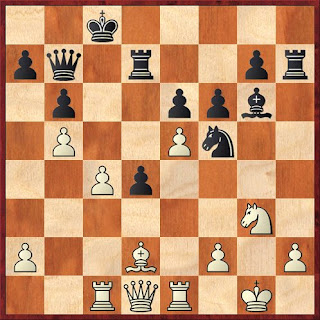 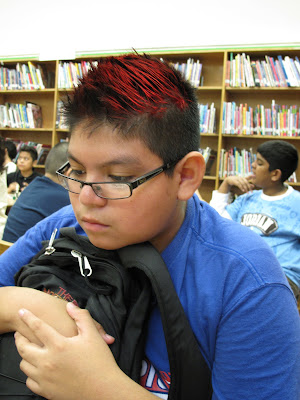 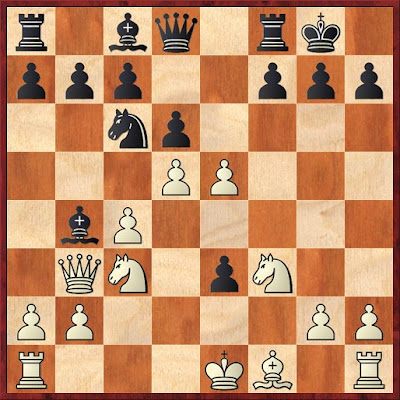 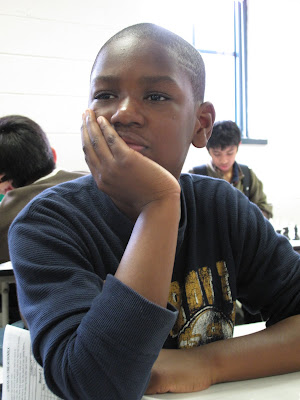 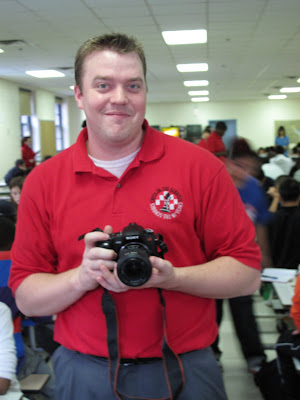 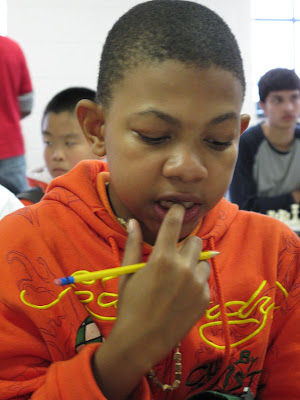 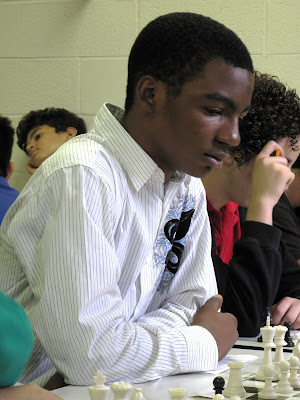 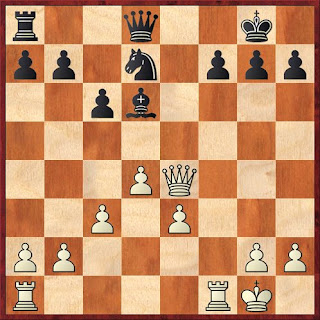 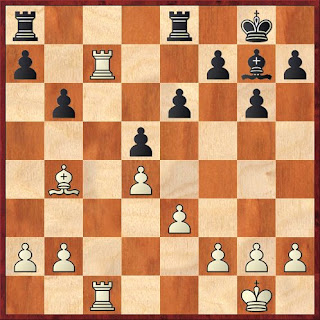 7) I was impressed with James' decision to take the bishop instead of the pawn. He eventually drew the game. 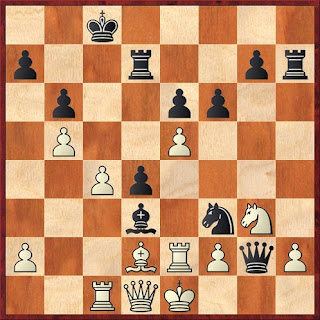 Posted by Elizabeth Vicary at 7:15 PM

Great, great post. I love taking these quizes. There is more an emphasis on tactics than strategy, but that's okay. Tactics are fun, and kids games are usually more of the wild tactical variety than the slow, solid closed positional manouvering kind.

You are obviously doing a great job with the kids.

i also enjoy the more contoversial posts (like the one slamming conservatives).

In my opinion, the study linking intelligence to political views was interesting, but it is obviously just a starting point since there are so many different types of conservatives (and liberals), that it probably doesn't make sense to lump them all together.

thanks, Marty, I really appreciate the kind words.

#8 also shows how knowledge of theory can blind us to the obvious: I wanted Black to play 6...a6 7.Bg2 h5 to get into the famous game Augustin-Nunn with the useful move-pair of a6 for black and c4 for white thrown in. :-)

(Nunn says that Black's best way of avoiding what happens in that game is Na4xc5, and later White's best line of defence is c3 and d4, which is impossible with the pawn already on c4).

Marty: Not to mention so many different types of intelligence. I mean, when you see that all the nations with the lowest "IQ" scores are poor countries in Africa, you have to question what the tests are really measuring.

yay solved them all!

Perhaps the tests are measuring reality, but that it's perhaps too uncomfortable for some people to believe there can be racial differences in intelligence, since brain configuration is just another phenotype.

Austinn-Nunn is a famous game? And you know enough about that game to recognize every position from it? Damn, are you like a GM or something? I barely remember my own games from last week at the club.