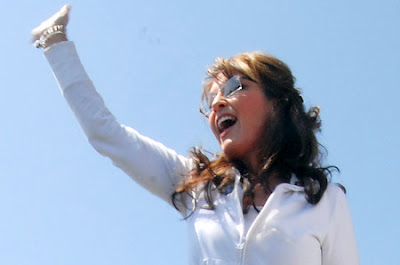 (you might want to watch this first*)
Let's start with a multiple-choice question: Which answer is correct?

1) Sarah Palin's resignation less than two/thirds of the way through her term as governor is a violation of her compact with the voters, a flaky act that destroys her credibility as a serious politician.
2) Her resignation was a brilliant tactical move that makes her the de facto frontrunner for the GOP nomination.
3) Who gives a @#%$ @#$ about your traditional political conventions?

If you answered #1 or #2 you missed the point. Sarah Palin is not part of your frame of reference. She isn't participating in the worldview you share with your allies and opponents alike.

"We're not retreating," Sarah Palin quoted Gen. MacArthur as saying, "we're advancing in another direction." Anyone who doesn't recognize the essential truth behind that statement runs the risk of not only misunderstanding Palin, but of failing to foresee the threat she could represent. And those who judge her performance on traditional lines will overlook her genuine talent.

Palin may be as erratic as many people say. I wasn't the only observer who noted a hopped up, free-associating, almost amphetamine-like quality to the cadence of her resignation speech. But another way to view her speech is as the latest example of a style that could, in the end, prove revolutionary. Call it "post-modern" politics.

Look up postmodernism (or "PoMo," as some call it) and you'll get a broad range of definitions. It's almost like the Supreme Court definition of obscenity: You can't define it, but you know it when you see it. It was born of the sense that there are no underlying principles or conventions we can trust. It involves identifying, naming, and ultimately shattering the rules under which we've all been operating. It's related to the theater concept of "breaking the proscenium" or "knocking down the fourth wall," acknowledging that some of us are actors and some are spectators in what is, after all, only a performance.

It was very postmodern of Palin to characterize her resignation - an outrageous act by any reasonable standard - as a principled refusal to "go with the flow." Her vision of politics is so profoundly radical that even performing the duties of office becomes unimportant. The job you sought is no longer the point. It's all about the performance. It's politics as Conceptual Art.
...

Posted by Elizabeth Vicary at 6:24 PM

She dispensed with politics as usual, put first things first, and tackled special interests. She fought, and succeeded in effecting change, and she's proud to take credit for it.

Interesting take. I felt she was showing some sort of naive high-mindedness with all of this. But maybe it works for her. I can tell you one thing she isn't washington as usual, and from what i've heard she has been talking with many experts in foreign affairs.

Don't give her any credit she didn't earn. I don't see her as PoMo in any way. A PoMo approach would acknowledge and respect the political styles that came before, and THEN create a mix or a mash of those styles in a playful irreverent way. But that's not what Palin is about. PoMo doesn't mean "anything goes", and it doesn't mean "I get to do whatever I want."

That's what bratty kids are about, when they want to pretend they know what they're saying, and are just faking it.

She's a quitter and a faker, and her own people know it. They're going to abandon her quicker than you can say "Bush who?"

It was General Oliver Prince Smith, not MacArthur, who said that. But, yeah, it sounds so much better when one attributes it to MacArthur.

Does #1 mean that anyone that quits before their term in office is up is abandoning their voters? Does the reason matter?

if anyone benefits from this, it is the people of alaska. now maybe they'll have a governor instead of a braindead spokesmodel.

Fer cryin' out loud, FOLLOW THE MONEY!!!
Between her (ugh) "book deal", speaking fees, etc. SarahPalin stands to pull in over $20,000,000 in just the next 12 months unless of course she has to hang around Alaska & be governor.
That's nothing to sneeze at, even for Miley Cyrus.

If only all politicians resigned. Dare to dream.

I always keep my eyes on the opponents king. It doesn't help.

I have no problem with Sarah Palin. She is what she is, and has accomplished a lot in her life. She certainly is entitled to base her decisions on her goals and judgements.

What is scary to me is that 10's of millions of US citizens voted to put her one heartbeat away from the Presidency of the US. ?????

I don't know what to make of Governor Palin. I don't share her politics or her world-view.

I will give her this muted praise--
she managed to surprise the various cable talking heads. That's worth one brownie point.

I think the most salient thing that can be said about all of this is that Sarah Palin is kinda' hot.

Hey now! It's not surprising that the career of Sarah Palin is being "wound down". The truth is, she never existed at all!

She is a fiction - an invention of Lorne Michaels, one of the great genuises of our time. A character created to be portrayed by Tina Fey - just as Emily Latella (sp?) was created as a character for Gilda Radnor a generation ago.

The really funny part is how McCain's advisors fell for the prank. It got a little out of hand there for a while. And imagine how embarrassing it would have been if McCain had been elected.

Obama, "establishment"? I swear, some of the people who post about politics here must be logging in from parallel universes.

Oh, I don't know. I hear Christine Gregoire isn't half bad. At running a state, that is. I don't know whether she's a rated player.

Wow! You nailed it.