17 Questions With GM Larry Christiansen of the Boston Blitz 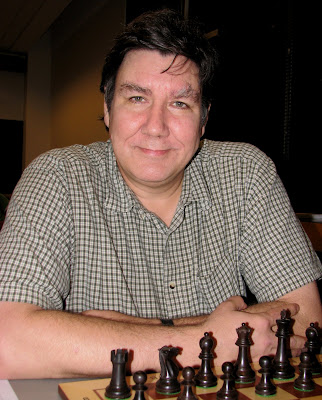 1. Quickie questions! What’s your favourite:
a. Fruit? Tangerines
b. Vegetable? Tomatoes
c. Ethnic cuisine? Italian
d. Breakfast food? Blueberry Pancakes
e. Drink? Bloody Mary
f. Dessert? Apple Pie
g. Classical composer? Beethoven
h. Painter? Van Gogh
i. Poet? Poe
j. Novelist? Raymond Chandler
k. Foreign Country? Spain
l. Geographic land formation? Yosemite National Park
m. Type of pie? Apple
n. Chess piece? Knight
o. Color? Blue
p. Musical instrument? Piano
q. Word? Refund
r. Person? Natasha
s. Calendar Year? 1956
t. Piece of clothing? Shoes
u. Holiday? Christmas
v. Day of the week? Saturday
w. Quality in yourself? Sense of humor
x. Quality in your friends? Sense of humor
y. Season? spring
z. Saying? “I’m not as dumb as you look”.
2. So how do you envision your match with Dallas going, board by board?
I lose, everyone else wins…
3. The last two finals have been won by teams who did not have a grandmaster on board one. Do you think this is a coincidence, or could it be that the small rating advantage conferred by having a player over 2590 is outweighed by the advantage of stronger lower boards?
This really increases the importance of the bottom boards---prob a slight edge for the non-gm teams—also they are younger and more ambitious.
4. I remember meeting Chris Williams for the first time when I ran into the two of you at 6 am in the lobby of a Houston hotel on the Monday morning after Grade Nationals. Having taught Chris for a long time, can you give us your opinion of him as a developing player?
Chris is much stronger now but a bit unpredictable. His openings have improved enormously
5. Why do you think Nakamura underperformed (if you do think he underperformed) for the Knights?
He obviously played too quickly.
6. How much do you care about the USCL result? Recently Ilya Krasik described not eating or sleeping after last year’s semi-final defeat by New York. Do you think you will share his experience if Boston loses the Championship?
Lol I will sleep soundly no matter the result. But I do want us to win.
7. How do you see the composition of the Blitz team next year? Any changes planned? Chris Williams was an amazing 4th board this year, but his rating has (deservedly) shot up. How will this affect his status for next year?

Likely, Chris and Denys will be moved up a notch or two. We should have more flexibility in the line-up and be ready to have a more balanced lineup.. I can see a crew of 2500, 2400, 2350 and 2350 as being well suited for many of our matches.
8. Who are your favorite and least favorite USCL opponents and why?
least favourite team NY and least favourite opponent Pascal Charbonneau
9. If you had to play for/ manage a different USCL team, which would it be and why?
SF Mechanics—good places to celebrate or drown sorrows
10. Describe your preparations for USCL games, including, but not limited to: opening preparation, pre-game superstitions, and interactions with teammates.
I walk from my place to the Harvard Observatory where we play which is about 2.5 miles and I get in the mood by playing material odds on ICC.
11. If you could choose the next USCL expansion team, which city would you choose, which players would you draft, and why?
San Diego and I would draft de Firmian, Fedorowicz, and two players to be named later
12. You have a new ICC show, Attacking With GM Larry Christiansen. How’s that going? How do you choose the material you present each week?
I have lots of games and examples of superb attacking play to draw from plus I can scrape up example from my own experience.
13. An ICC addict requested I ask the next question: What are the people who lose to you in material odds blitz doing wrong?
They play a little too scared in general.
14. How much competitive chess are you playing these days? Are you happy with the amount? Any plans for upcoming tournaments? I often see Natasha at tournaments without you; are you often tempted to go with her or do you feel like you are completely over Goichburg-style Swisses?
I skip 2 rounds a day nowadays but anticipate playing in some tournaments this spring and summer.
10. What are/ were your thoughts on the US Championship in Stillwater?
The organizers and sponsors deserve high praise for hosting and sponsoring the even under difficult circumstances.
11. If you had to pick name on type of ending that you are especially good at, what would it be?
Q vs K

12. Which are your top five chess-related websites and why?
TWIC, Chesslab. Chessgames.com, ICC, Chessbase and BoylstonCC I get recent games, news, and local color. Chesslab is easy to use, TWIC has great timely info, Chessbase has it all and the Boylston blog keeps me informed on local issues. ICC is simply the best site out there.
13. What chess book had the most influence on you?
Reinfeld 1001 Sacs and Combos
14. Which chess player (living or dead) do you admire the most?
Tal
15. If Bill Gates gave you $500,000 to organize a chess tournament
a. where would you hold it, Death Valley in the summer
b. what format would you choose, Outdoor tournament, bring your own water;
c. who would you invite, and The top 800
d. what, if any, special rules would you impose? Absolutely no quick draws
16. How obsessed are you with chess? In an average week, how much do you study, play and think about chess? When you study, what exactly do you do? If you could choose to be more or less obsessed, would you choose either and to what extent?
I am fairly obsessed—I study with Shredder and go through openings mainly but I also pay attention to interesting endings and I review about 100-200 recent games per week at least. My obsession is just right imo. On an average week I am either playing, teaching, writing or studying chess about 60 hours per week.
17. In recent years, a number of prose books about the chess world have been published. Have you read any of the following and, if so, what did you think: The Day Kasparov Quit (Dirk Jan ten Geuzendam), Chess Bitch (Jennifer Shahade), The Chess Artist (J. C. Hallman), Kings of New York (Michael Weinreb), The Art of Learning (Josh Waitzkin), King’s Gambit (Paul Hoffman), Engaging Pieces (Howard Goldowsky), How Life Imitates Chess (Gary Kasparov)?
Read Chess Bitch and King’s Gambit I found Jennifer’s views on chess and chess players quite interesting. King’s Gambit was a fun read well-written with interesting insights from a real chess fan.

Posted by Elizabeth Vicary at 6:33 PM

Chandler played chess (or at least, Philip Marlowe did) so that makes him cool, but I think I still prefer Hammett. Elmore Leonard is overrated, especially by himself. Dick Francis obviously doesn't write his own books. John MacDonald should have stopped at "turquoise". I only have read one by Ross; it was pretty good. "Fletch" was ok though I figured out where it was going without even having to pay to see Chevy Chase.

Poe wrote that story about the chess computer (why don't we call them "automatons" anymore?) so he's cool too. Chess Life is only interested in chess in the movies, though, because they think chess already has an effete intellectual image. Do you think that's right?