A Conversation With GM Julio Becerra of the Miami Sharks 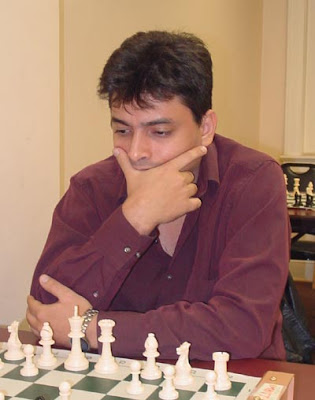 You are playing in the Spice Cup. How’s that going? Who do you think is going to win?
It's a very nice tournament. Susan has done a good job. I think its hard to say who will win because there are many people here who are about the same strength.

You have an incredible personal record in the USCL, winning MVP two years straight. Why do you think you play so well in the league?

I think I try to do the best for my team. I like to play team tournaments.
Of all your games this year, which are you proudest of?
Probably the one with Stripunsky. He played a strange line of the Paulsen with Ne7-c6. He wants to trade knights on d4 and bring the other knight to c6. So I played 7. Nb3 to avoid this. Then the idea to sac the pawn on e5 and play f5 is something typical… it leads to a very strong attack for white. In the end 27. Rd1 was very nice because he can take my queen but then it's mate on d8.
Describe your preparations for USCL games.
I never go early to the club because I think maybe if I go early I will get a bit tired. Also, on that day, I don’t teach any lessons because it's important not to be tired for the game. It's important to be serious for the team.
Aside from yourself, who or what do you think are the keys to Miami’s success?
I think for sure the 4th boards are playing very well in the last 4 – 5 games. They've scored many points.
Do you help the third and fourth boards with opening preparation?
Usually they don’t have time to prepare because they are coming straight from work. The one I can prepare more is Marcel.
How do you choose the lineups each week?
I think we going to play with the same team for the rest of the season. Before, Blas was unavailable to play, but I think it's clear that the best team is with Marcel playing 3rd board.
In your earlier match this season, Dallas beat Miami. Any plans to make sure this does not happen again?
We going to try to prepare, to do the best for this time. I think anyone can win. It's like in baseball: the important thing is to be in the playoffs. Once you are there, anything can happen.
If you make it to the finals, would you rather face New York or Boston? Why?
I think I want to play New York because, well, ... it's always fun to play against Nakamura.
Do you mean you want to face New York because you personally like playing Nakamura, or do you mean you think Miami has better chances against New York?
Oh, I think we probably have more chances against Boston. Just because if it's 2-2 and goes to the tiebreak, it will be very hard to beat Nakamura in blitz.
.
If you could choose the next USCL expansion team, which city would you choose, which players would you draft, and why?
The first one for sure is LA. They have a lot of good players: Akobian, Melikset Khachiyan, there are people there from Armenia who are very good players. Oh, and Taylor lives there too.
Do you have dreams about chess?
Sometimes, when I sleep I dream that I make 2600 and make the American team.
That's a dream you have when you are sleeping or when you are awake?
Both.
How obsessed are you with chess? In an average week, how much do you study, play and think about chess?
It's different every time, but usually 4-6 hours per day.
What do you do exactly when you study?
A few different things: every Monday I download TWIC: I play through the games, check my openings there. Also I have a friend of mine who tells me some positions-- like checkmates in 2-- that I have to solve blindfold. These are positions with all the pieces on the board, usually from the book by Polgar's father. It's very useful training.

Are there any openings that give you special pleasure to either play or play against?
The Ruy Lopez with both white and black. I enjoy it and I have good results with that opening.
.
If you had to pick name on type of ending that you are especially good at, what would it be?
Queen endings. I’ve had a lot of queen endings and I think I play them ok. Maybe its because there are many tactics.
Ok, last question: If you were trapped on a desert island for eternity with no possibility of rescue and could choose to have with you:
a. 5 books? One year ago I could not say this answer but I've started to read a lot. I read quite a few books in the past years and I liked it. The Secret (Rhonda Byrne), The Alchemist (Paulo Coelhe), The Painted Veil (Somerset Maugham), and then two chess books: Korchnoi's Chess Is My Life and Dvoretsky's Endgame Manual.
b. 5 albums? I like romantic music... in English? ... Air Supply
c. 1 chess player? Anand
d. 1 luxury item? I'd take a baseball; I love baseball very much. A-Rod is my favorite player.
Posted by Elizabeth Vicary at 4:27 PM

Awsome interview...Best this year I think.

Ooh, bulletin board material for the Blitz!1!!1! (Okay, it's a stretch)

Nice interview Liz, you continue to inform and entertain the USCL audience-at-large. If only you weren't so good looking and we could take your work seriously! I'm anticipating an objective yet compelling reply to those horrible accusations in the previous post.

No, but seriously folks, if you think I'm a narcisstic, manipulative, attention-seeking bitch, don't read my blog. Just leave me alone.

Although, just as a side note, I do happen to agree with the stalker that the uscl picture is ridiculously cheesy. I objected strenuously when Greg chose it, but his winning argument, "It's my website, so I get to choose the photo," was hard to refute.

It’s sad that Elizabeth volunteers to do something nice for the Chess community and is rewarded with inane accusations. I enjoy the interviews, especially the one with Jay. Keep em coming ;).

Globular I'm pretty sure that I wasn't being referred to as "retarded". However I appreciate that of all the people who may be in or have been in Philadelphia at one point or another, I was the first one that popped into your head as a possible "retard" :)

Anonymous said...
This comment has been removed by a blog administrator.
November 3, 2009 at 7:54 AM