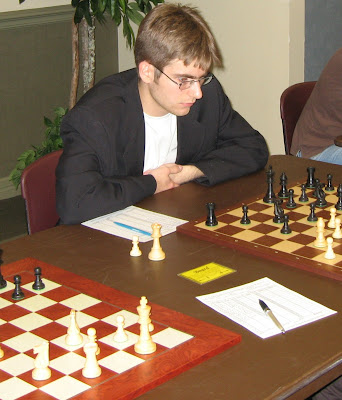 1. You have a truly incredible performance this season (also last). Why do you think you play so well in the USCL?

I think I'm doing so well this season because I've become a bit more mature and experienced, both in chess and life in general. A few years ago, a friend of mine told me that he's noticed a pattern of young chess players reaching their local peak performance at the age of 21. So I guess he was a good prophet! On the other hand, I'm also enjoying chess more than I used to a few years ago. And of course, I had some luck in a few games, but I'm not complaining! Mistakes are an inherent part of chess and you need to know how to take advantage of them.
2. I understand you felt unfairly passed over for the Game of the Week nomination. Which of your games do you feel most deserved to win, and why? Please describe both why it should have won and why it was of higher quality than the game that did win that week.
Yes, I believed I deserved a GOTW for my win against Tangborn. It was a really well played game on my part, both from strategical and tactical standpoint. However, judges didn't share my opinion and that's fine. It's a very subjective matter, despite some objective features to it, so I understand it's hard to make everyone happy.

3. How obsessed are you with chess? In an average week, how much do you study, play and think about chess? When you study, what exactly do you do? If you could choose to be more or less obsessed, would you choose either and to what extent?
I'm obsessed with chess and I can't help it :) Sometimes I find myself studying a certain position knowing that I'm supposed to do something else. It's like a mental drug. But if someone offered a cure, I would decline it :)
.
These days I'm mostly studying typical middlegame positions and trying to find new opening ideas. I already know a lot about chess so I don't have to bother with basic stuff. I also like to learn from 2700+ GM's games because they are dictating chess trends.
4. Describe your preparations for USCL games, including, but not limited to: opening preparation, pre-game superstitions, and interactions with teammates.
I start preparing for my opponent as soon as John informs me about the lineup. Fortunately, I got rid of pre-game superstitions, it's a really stupid habit. When I was younger I used to have a favorite pencil, favorite route to the game, and such useless routines. I doesn't make any sense if you think about it.
My preparation for USCL games is quite thorough since I have more time to prepare compared to regular tournaments. I'm trying to get as much data about my opponent as I can, and try to asses his overall playing abilities in order to know what kind of game I should expect. Then I decide on my opening and prepare accordingly.

5. How much are you playing chess outside the USCL? What’s your next big tournament? How ambitious are you in chess in general?
During the school year I hardly play any tournaments, but I make up for it by playing heavily during school breaks. I like it that way, because it allows me to fully concentrate on school when it's time to study, and on chess, when I play in tournaments. USCL comes nicely as a link between those two periods.
As far as my chess ambitions go, I'm not too ambitious about my chess career because I'm planning a career in business/finance. Hopefully, I will get as many opportunities to play chess as possible, because I just love it.
6. What are your thoughts on America in general, and Texas in particular? It must be something of a culture shock for you?
It is a bit of a culture shock, but I'm trying to fit in. Texans are friendly people in general and UTD community is very supportive of international students. What really impressed me about Americans is their appreciation of hard-work, which is lacking in the part of the world where I come from.

7. In recent years, a number of prose books about the chess world have been published. Have you read any of the following and, if so, what did you think: The Day Kasparov Quit (Dirk Jan ten Geuzendam), Chess Bitch (Jennifer Shahade), The Chess Artist (J. C. Hallman), Kings of New York (Michael Weinreb), The Art of Learning (Josh Waitzkin), King’s Gambit (Paul Hoffman), Engaging Pieces (Howard Goldowsky), How Life Imitates Chess (Gary Kasparov)?
I have to admit I haven't read any of these books. It seems they were created to spread awareness about chess in the general public, which is good because chess needs more financial support.
I'd like to note that Kotov's "Think like a Grandmaster" and Shereshevsky's "Endgame Strategy" are my favorite chess books.

8. Which are your top five chess-related websites and why?
.
Crochess.com-chess news from Croatia
Chessbase.com-interesting chess articles
The Week in Chess-TWIC download and news
Susan Polgar Chess Blog-covers a lot of chess stuff
USCL-I like to be informed about the league
.
9. Give us the inside scoop on the UTD chess team. How cohesive are the chess players there? Are you all close friends? Do you study together? How regimented is the chess training?
We're a pretty cohesive group both inside and outside of chess. I get along well with other team members, but I'm good friends with only a few of them. It's similar with others. I honestly don't know anything about other people's chess training. Like if you asked me how does Alejandro Ramirez work on chess I wouldn't have a clue. I think people like to keep those details to themselves, because, although we have to work as a team in collegiate tournaments, we want to beat each other in individual tournaments, such as the UTD GM Invitational.
10. What is the playing environment like at the Dallas site? Do you have spectators? Andrei Zaremba reported many distracting girls at his games. Has this been a problem for you also?
.
Yeah, it can get distracting with all those people dropping by, so each player needs to find his own way to concentrate on the game in the critical moments. But I don't mind the spectators because it's much more fun when they are around. The only thing I don't like is our internet connection. For some reason our supposedly stable campus connection breaks at least twice during the game.
I should also note that Keaton Kiewra is our most ardent supporter, we usually win when he is around (or on the team).

11. You will probably play board two in the upcoming final. Would you prefer to face Perelshteyn or Sammour-Hasbun? Why? Which do you expect to play? What predictions (opening, result, type of game) would you make for the encounter?
It's hard to predict anything, so I won't go into it. However, from what I've been able to conclude so far, Sammour-Hasbun will likely be the most challenging opponent this season. I'm looking forward to the game!

12. What you think Dallas’ chances against Boston are? How do you see the match, board by board?
I've believed we would win the league since the very beginning, so I see us winning the match on Wednesday :)
13. How much do you care about the result? Recently, in a video, Boston’s Ilya Krasik described not eating or sleeping after his team’s defeat last year by New York. Do you think you will share his experience if Dallas loses the Finals?

If we lose in the finals, I will probably quit chess. Just kidding ;) I played a few last round matches with even higher stakes before, so I'm used to the kind of psychological pressure Ilya had described. In any event, I'm delighted that Destiny has made it this far, so I already feel as we've accomplished something big, regardless of the final outcome.
Posted by Elizabeth Vicary at 4:45 PM