Nineteen Questions With NM Chris Williams of the Boston Blitz 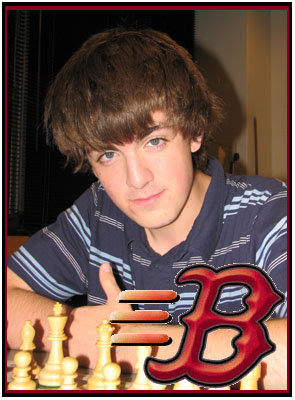 1. If you were trapped on a desert island for eternity with no possibility of rescue and could choose to have with you:
a. 5 books
b. 5 albums- Ultimate Victory, chamillionaire some others, idk I like many diff kinds of music.
c. 1 chess player –my fav ladyd.
d. 1 member of the USCF executive board -oh hell nahe.
e. 1 luxury item, -my ipod
(The island already contains a chessboard and clock)
2. Who are your favorite and least favorite USCL opponents and why? (You may answer individuals and/or teams)
I really enjoyed all of my games, I felt they were tense, like I had really strong opposition, and I have high respect for each of my opponents for putting in the effort, they were all really great games, I suppose I was most impressed all inaccuracys and anaylysis aside, with iryna zenyuks play vs me she was very methodical and took a lot of time and found a very brilliant idea (rg5) and that was quite impressive.
3. If you had to play for/ manage a different USCL team, which would it be and why?
I’m very interested in seeing many more teams emerge in the uscl, im particularly looking forward to seeing an Arizona team form I have many friends from there, through national tournaments and also Robby Adamsons Western Invitational chess camp, whom I hold in the highests esteem for all he has done for scholastic chess and my own personal improvement.
4. Describe your preparations for USCL games, including, but not limited to: opening preparation, pre-game superstitions, and interactions with teammates.
I usually find out (if possible), the icc handles of my opponents and go eco code hunting in chess base, trying to find a good preparation for that particular player, I do not mind veering off in to unfamiliar territory during the actual game in my preparation warrants me some sort of edge from the opening
5. So New York will be your opponent in the Eastern finals. You lost to Zenyuk last time. What will you do differently in this game? What do you see as her strengths and weaknesses? Percentage-wise, how do you rate your chances?

Well in our last game I really just messed up at the end, I didn’t play my fav move of all time quite possibly, I had my mouse about to release it instead I like just gave her a bishop and was lost the move was Qe6 sacking the queen for 2 pieces some pawns and tremendous dirty potential specially with her time situation. Iryna is a very strong player shes original, solid, and methodical, my game with her will be a hard one im sure I just hope I will be able to keep a consistent mind set throught the entire game.

6. What are your predictions for the other boards? (I have no inside information, but let’s assume a line up of Nakamura, Charbonneau, Bonin and Zenyuk.)

7. If Boston wins the Eastern finals, who do you expect to see as your opponents in the championship? How do you rate your chances against them (board by board)? Are there any specific lineups you would hope to play against?

I think our oppents would be the dallas players, I predict I would play millsits on last board and it would be a good crazy game and possibly a league championship deciding game.
8. I understand you felt unfairly passed over for the Game of the Week award several times. Which of your games do you feel is most deserving and why do you think the judges robbed you so blindly?

Idk I was just being obnoxious, but yeah I was surprised at some of their evals for game of the week especially that Hilton kid’s he seems like a nut
9. What are your upcoming otb chess tournaments/ ambitions? Do you study with anyone?
I’m going to play vegas in December the NAO where I hope to do well and maybe get the u23 prize my rating for it will be 2298, I have studied with Christensen he is a great coach and I credit him for most of my chess abilities he really helped me, I haven’t studied with him for quite some time, I just really haven’t been in the mood for lessons I just kinda have preferred lately going over GM games on chess base and various other places, its an exercise I learned from him and it really does work, kinda like doing push-ups the benefit is seen long term.
10. If you could change any one USCF or FIDE rule, which one would it be and why?

I wuld get rid of the prize limit rule that was recently put into practice by bill goitchberg and his Continental Chees Association (CCA) which states that a player playing in a section may not win a prize higher than (lets say 2000 when 1st is 10k+) if their rating in the past year has exceeded 20 points over the section maximimum, in my opinion this is not the best way to get rid of sand baggers it just forces them to find alternate more sneaky routes and it punishes good honest players like my self when they genuinely deserve the prize they win, im referring of corse to this past World open in which I was entitled to a nearly 6k prize and received on 2 in the u22 section after having defeated many notorious sand baggers in tense situations, when I was technically if u go back in the msa history entitled to the prize even by their rule it was uscf who messed up my supplements and I was in fact not over 2200 for a whole year previous to the WO, the final decision tho after much discussion by the tds was to give my money to the other people I tied for 2nd with.
11. How obsessed are you with chess? In an average week, how much do you study, play and think about chess? If you could choose to be more or less obsessed, would you choose either and to what extent?
Oh yeah im obsessed with chess, chess ****ed up my life and if I culd go back in time I wuld never have started.
12. Are there any openings that give you special pleasure to either play or play against?

I am a Sicilian kan player I find it an apropreitly dirty unsound opening that I have a good record with that players find hard to play against, with white I like playing chess, I do study many diff openings and feel I have a general knowlage of most and really play w.e I want with white depending on my mood.

13. If you had to name on type of ending that you are especially good at, what would it be?

i particularly like displaying the truth in chess, one way ive recently done this si by beating this 2400 dude in an equal material ending in which I had Q+B vs Q+N on an open board with lots of pawns, and compter eval wuld say equal but I proved how much more powerful a bishop can be in an endgame vs a knight technically.

14. Which are your top five chess-related websites and why?
Uschess.org Uscl.org ICC Brads Blog Boylston Blog, just cuz I get the most info about chess from them.
15. What’s your life like outside of chess? You probably graduated high school last spring? Going to college? Working? Studying chess full-time? Living with parents? Friends? Where?

I live at home and I graduate this year, going to college next year not sure where yet, weel see

16. Any thoughts on Kasparov’s recent appearances on Colbert or Maher?
I think all these tv programs do their best to discredit him, one example that most upset me was his appearance on channel 2 (GBH) a cuple years back in which they refered to him under his face on the screen as “former chess master, garry kasparov, that kind of ignorance by ******* out side the chess world has always been a thorn in my tush and very upsetting to me, it really discredits all the hard work and stress that chess players go thru day by day.
17. In recent years, a number of prose books about the chess world have been published. Have you read any of the following and, if so, what did you think: The Day Kasparov Quit (Dirk Jan ten Geuzendam), Chess Bitch (Jennifer Shahade), The Chess Artist (J. C. Hallman), Kings of New York (Michael Weinreb), The Art of Learning (Josh Waitzkin), King’s Gambit (Paul Hoffman), Engaging Pieces (Howard Goldowsky), How Life Imitates Chess (Gary Kasparov)?
Ick I hate chess journalists specially mig greengard, I think icc was dumb to replace paschal with him as chief web caster his a complete dunce.
18. What are your thoughts on the Krasik- Bournival war? Do you feel, for example, that “Ham Sandwich” is comparable in quality to “Chris is Awesome”?

I really am not going to go into this, ill just say I wish it would end because I am good friends with both of them.
19. If you could hand pick any seven people to serve on the USCF executive board, who would they be?

Well I don’t particularly belive in all the boards comitee nonsense that goes on, but I suppose prolly my closest chess friends who I trust to make the chess world a better place in the US.
.
If you got this far, you will want to listen to this:
http://bradenbournival.com/chris_is_awesome.php
Posted by Elizabeth Vicary at 7:34 PM