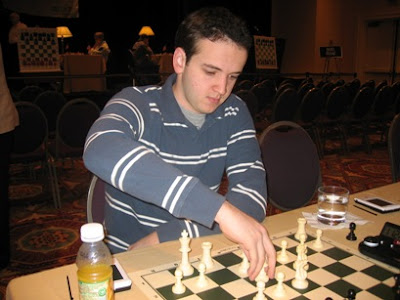 1. Do you feel like Carolina faces special difficulties fielding consistent USCL teams because so many of the players are students at Duke? Any thoughts about how that has worked in the last couple years, or what changes might occur in coming years?
It’s very tough to have a team in North Carolina since there is a lack of players here. We use pretty much the same line-up for all of our matches and have some players on the team who are a few hours commute away. Duke definitely helps attract players but it’s not consistent. Hopefully, we can maintain a team here by attracting more top chess players to Duke.
2. In 2005, you won the league’s top board two award. Since Kaminski left, you’ve had to move up to first board. Have you enjoyed this or has it felt discouraging?
I have enjoyed playing with stronger player on first board. We definitely miss having Kaminski play for our team.
3. You play very sharp openings. How do you manage to keep up on theory while in college?
Preparing for my games in the USCL helps me keep up with theory. I also try to go through some of the latest top-level games to see if there are any novelties in the lines I play.
4. How obsessed are you with chess? In an average week, how much do you study, play and think about chess? If you could choose to be more or less obsessed, would you choose either and to what extent?

It’s pretty hard to be obsessed with chess while in college, but I think playing in the USCL helps me stay active. I usually study the most before a big tournament so I haven’t been studying too much lately but I did play two tournaments this summer which I prepared a lot for. I definitely play less chess now than I did in high school. I think I am well balanced in terms of chess and will concentrate more on chess this winter break when I plan to play a tournament or two.

5. What are you majoring in at Duke? Do you like it there? What are you hoping to do after graduation? Are you planning to apply for the Samford?
I am majoring in Economics with a possible minor in Statistics. Duke is a fun school with a good mix between social and academic life. I really enjoy the atmosphere here. After graduation, I plan on getting a job on Wall Street but I am also considering applying for the Samford after I graduate and taking some time off between finishing school and beginning work. It would be fun to take 2 years off after graduation to concentrate fully on chess. During college, it has been hard to improve at chess since there is no time to play.
6. I really enjoyed the tactic you showed at the NE Masters from your game against Fang. Can you tell us something about the game? 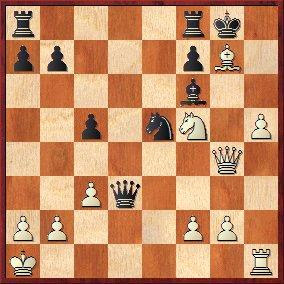 28. Ne7+ Kh7 29. Qg6+ fxg6 30. hxg6+ Kxg7 31. Rh7#
My tactic against Fang is the most beautiful one I have ever played. I was trying very hard to win and avoid a repetition so I just kept looking at the position until I found the tactic. The tactic briefly entered my head at first but I didn’t think that it would be possible. But I looked into it further and couldn’t find a refutation. I am very proud of this game.
7. What was your favorite USCL game this year (of yours or anyone else’s)?
None of my games were particularly good but I guess my game against Drasko Baskovic was my best performance. I played solidly and didn’t make too many mistakes.
8. Which of your teammates would you nominate for Carolina’s MVP award and why?
That would have to be Oleg Zaikov. He always plays very well and has been our top performer. We would be a lot worse off without him.
9. Describe your preparations for USCL games, including, but not limited to: opening preparation, pre-game superstitions, and interactions with teammates.
I usually do some opening preparation and then help out my team members, especially Schroer to figure out what to play. We have e-mail exchanges between all of our team members to help out before the match and to give each other pointers about what to play against specific opponents.
10. If you could choose the next USCL expansion team, which city would you choose, which players would you draft, and why?
It should be a big city like LA with players such as Akobian and Khachian or Chicago with Shulman and Dmitry Gurevich. It’s tough to have a team in a small city like Durham, North Carolina where there aren’t that many chess players.

11. If you could change any one USCF or FIDE rule, which one would it be and why?
I would love it if the official time controls were even faster. It would make the games a lot more exciting and would also allow tournaments to be quicker. I think this would make chess a more exciting game and help attract more players and more sponsors.
.
12. Any thoughts on Kasparov’s recent appearances on Colbert or Maher?
I love that Kasparov is getting a lot of attention. It is definitely a good thing for chess. I thought Kasparov’s arguments on Bill Maher’s show were really well argued. Kasparov is bringing a lot of attention to the political situation in Russia and hopefully this will bring about some positive changes in Russia.

13. Which are your top five chess-related websites and why?
.
I love the new USCF website with its online articles. I like to check Mig’s Daily Dirt Chess blog at chessninja.com and Susan Polgar’s blog is a great way to see what’s going on in the chess world since she doesn’t miss much. The Chessbase site also always has interesting stories.
Posted by Elizabeth Vicary at 5:17 PM

Lev - in the late 80s there were NO players at Duke. (Well, maybe they were all too busy with school.)

Great interviews! But I think your readers would be equally interested in learning more about the interviewer. To that end, I have compiled 10 questions for you.


(1) What is it that you enjoy most about chess? Is it the excitement of competiting in tournaments; the thrill of winning; the aesthetic pleasure of seeing a well played game or a great move; opportunities for friendship and travel; making insecure male players feel even more inadequate?

(2) If you didn't have a career in chess (including teaching, journalism, and playing for the Knights), what would you be doing instead? Assume you had another lifetime to start anew.

(3) How long have you hated puppies? What sort of music do you enjoy? Dislike? What are your "desert island" CD selections?

(4) A quantized entropy fluxoid has disrupted the fabric of the space-time continuum. Do you (a) reverse the polarity of the positronic wave matrix; (b) wrap your head in a damp towel and down a gin and tonic; (c) other (specify). Suppose you have 24 hours of free time - what would you do for amusement?

(6) If you could invite any 3 characters (real or fictional, living or once living, historical or hysterical) to play a round of golf with you, which course would you play? Oh, and who would these 3 characters be?

(10) Tell us more about the hole in your leg. Is it a fashion accessory? Political statement? Medical emergency? If you could magically change your physical appearance to that of some well-known celebrity, who would that be?

The game against Fang was from Foxwoods, not the NE Masters.

It was from Foxwoods, but Lev showed the position to a group of people (myself included) who were hanging out after the last round of the New England Masters.

Lev - in the late 80s there were NO players at Duke. (Well, maybe they were all too busy with school.)

Hi Derek! I'm afraid I couldn't let this pass. Until 1989 *I* was at Duke, although I was a faculty member, not a student, so perhaps this fact was not apparent. I won the state championship in 1985 and 1987 and reached master for the first time in 1988. (Of course, the fact that an expert managed to win the state title twice does kind of show the low ebb that all of North Carolina chess was at, not just Duke.)

Not only that, I beat you in a Two Knights Defense at Phi Kappa Blanca 15 in Raleigh, in October 1986.

Duke chess had a high-water mark in the mid-1980s, when we had Michael Feinstein (2400+) and Bill Mason (2200+), who formed the core of the "Walk the Dog" team that won the US Amateur Team title twice. There was also a Duke-UNC chess match in 1985, on which I played third board (behind Michael and Bill). I'm not sure who won the match. But I think that after Michael and Bill graduated, things did drop off precipitously. I don't even remember if there was a chess club. So you're kind of right.

There was also a girl who played chess, named Elizabeth Vicary, but she wasn't in college yet... (Don't worry, Elizabeth, I won't tell any stories. Actually, I don't have any good stories to tell.)

(At that time my surname was Nance; I changed my name when I got married.)

as a young father, I brought my little ones to their first chest tournament, (and my first, too!) on Long Island.

I had never played competitively, but was always an athlete, so one can imagine my horror when I was paired to play against a little boy!

I lost soundly to the little guy, who was respectful and polite, and did his best to keep his smile down, as to not hurt my feelings. Later, I told my sons about how I had respected his manners and sportsmanship.

After an almost 10 years of no chess, I have returned to playing and wanted to show the kids my old chess scoresheet from my first tournament and lo and behold, who's name was on the scoresheet?

I have skyrocketed to almost 1400 now and see that Lev has done pretty well for himself. :)

As goes the child, so goes the man, therefore, I am sure this young man has retained his manners and grown in his sportsmanship.

I wish him much continued success in chess and in life. He deserves it.