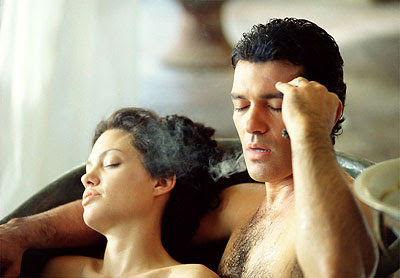 Before you all get too excited, let's not forget that Elizabeth often claims her favorite movie is "Clue".

We've actually been keeping it from you, Elizabeth -- we self-appointed guardians of public morality. It was a well-orchestrated conspiracy of silence and subterfuge, but like all such plots this one has now unravelled.

Of course, now that it has, we'll all go and watch the movie ourselves. If there's one thing at which we self-appointed guardians of public morality excel, its hypocrisy.

Because anyone willing to shell out the bucks to see (or rent) that smarm would be disappointed if there wasn't any gratuitous boot knocking between Angelina "I stole Brad from Jennifer" Jolie and Antonio "I stole Melanie from Don" Banderas.

"Sex Is Not The Enemy"

True love is like gold
There's not enough to go around
But then there's god and doesn't god love everyone?
Give me a choice
Give me a chance to turn the key and find my voice
Sex is not the enemy

A good movie exploring the concepts of love and lust, i cant believe you havent seen it before.

My favorite movie is Clue.
How dare you!