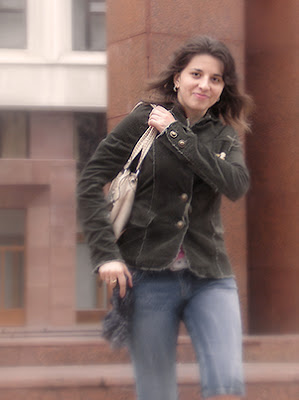 1. If you were trapped on a desert island for eternity with no possibility of rescue and could choose to have with you:
a. 5 books
b. 5 albums
c. 1 chess player
d. 1 luxury item,

a. “A Hero of Our Time” by Lermontov, “The Brothers Karamazov” by Dostoevsky, “Les Miserables” by Hugo, Bible, “Confessions” by Augustine and “Zurich International Chess Tournament, 1953” by Bronstein
b. I would take Russian Rock band DDT, Kelly Clarkson’ albums, some classical music like Tchaikovsky “The Seasons”.

c. I will take two: Josh Friedel and Tatev Abrahamyan.

2. Describe your preparations for USCL games, including, but not limited to: opening preparation, pre-game superstitions, and interactions with teammates.

I start thinking about my game Sunday night when the pairings are posted. But I usually don’t sit at the board preparing until Tuesday night or Wednesday after my classes. I have no superstitions; I listen to Russian rock, while walking to the club. Sometimes we go to dinner Tuesday night with Irina, it is fun, I find Irina to be very supportive of her teammates.

3. If you could choose the next USCL expansion team, which city would you choose, which players would you draft, and why?
I think Chicago because they have Shulman, Gurevich and many other strong players there or LA with Akobian and Khaciyan.

4. Are there any openings that give you special pleasure to either play or play against?
Kings Indian Defense has been my favorite opening for black for long time, but now I enjoy to play against it with white too, I also like to play Taimanov Sicilian.

5. Which are your top five chess-related websites and why?
Chesspro.ru – for their tournament reports and analyses;
Uschess.org – I visit it every day to keep up of what going on in US chess and to see rating updates;
uschessleague.com- I follow the league closely;
Chessbase.com – worldwide chess news;
chesscenter.com- to download TWIC.

6. How obsessed are you with chess? In an average week, how much do you study, play and think about chess? If you could choose to be more or less obsessed, would you choose either and to what extent?

I am pretty obsessed with chess. I used to study chess like 3-6 hours but now I would be happy to study for 2 hours a day. I play every other weekend in Marshall CC and played for the past seven Wednesdays for USCL. Thinking about chess positions comes randomly when I am in train, elevator, during classes, dinners. The positions are usually from the recent games I have played, I replay them in my head and try to find reasons why I made this move or that move etc. Because I don’t have courage to quit chess I would rather choose to be more obsessed with chess, I would love to be full time chess player.

7. You have an incredible record in the USCL (current performance rating: 2478!). Is there any special reason for this? Have you been studying a lot recently? Do you play better in the online format of the USCL? Is it because you can prepare for the games?

Today I saw my performance rating in USCL, it is rather good! I can guess that one of the reasons for my good play is that I went back to visit my relatives in Ukraine for August and September. I had a chance to study chess intensively for two weeks there with my past coach Kobylianskyi Igor. I mean like 7 hours per day, 2-3 hours personal training and 4-5 with the group. I was very happy to study so much chess. I also played two tournaments; I did well and got my second WIM norm. This prepared me well for the USCL, I really take seriously the league and want to do my best to help my team. I play better in online format, it is less emotional for me. Also, preparation helps, so far I could guess like 50% of the opponents’ openings.

8. You will almost certainly be playing Chris Williams in the upcoming match with Boston. What do you think of him as a player? Could you name specific strengths and weaknesses? Do you have any predictions for your individual game (result, opening, what the decisive factor will be)?

I think Chris is very dangerous opponent. Looking at his games I see great determination from his side, he is an aggressive player, calculates very well, he is not afraid to go into sharp, double-edged play where the price of tempo can cost you a point. The first game we played was very sharp, at some point I thought I lost the thread of a game, after 21.Nd6 I thought I was just worse, my attack didn’t work and my king was bad. Then, after 21…Nb6 I found nice rook maneuver, of course giving up his bishop was a mistake but we were both in time pressure, so it was hard to find the best moves. I hope for a hard fought game on Wednesday! And btw the song about Chris is great!

9. What’s your life like outside of chess? You are studying at Brooklyn Polytechnic to work in space type research? What exactly are you aiming to do? How long will that take? Do you also work? Do you have any other hobbies?

I will graduate in May 2008 from Polytechnic University with BS in Mechanical Engineering with Aerospace concentration. My dream job would be to work for NASA. So far I plan to go to a grad school, which will take two more years. Outside of chess I like to play volleyball. I played for highschool team and also two seasons for college varsity team. When it is warm outside we go to play to Central Park with my friend, we have a really great time there. I also like running, this is the time when my mind relaxes, I usually go running outside and late when it is dark and not many people around, I don’t like gyms, they are crowded and noisy. I also enjoy reading and playing guitar (beginner level).

10. What are your upcoming chess tournaments/ ambitions? Why didn’t you play in the US Women’s this summer? Do you study with anyone?

My short term goal is to get my third WIM, then in following two years WGM title that is why I am mostly aiming at 9 round Swiss or round robins. I plan to play in December in Marshall Club Championship and in February in Aeroflot Open. It is not that easy to fit chess tournaments during a school year, this semester I missed a month of school, it looks like summer is the best time to play chess. But it is not always so, for example this summer I did two months internship, working for professor in the field of spacecraft formation flying control and couldn’t play in US Women’s Championship. But I followed all the games live during work J . I have been studying chess with my coach Vladimir Lymar for the past six years.
Posted by Elizabeth Vicary at 6:34 PM