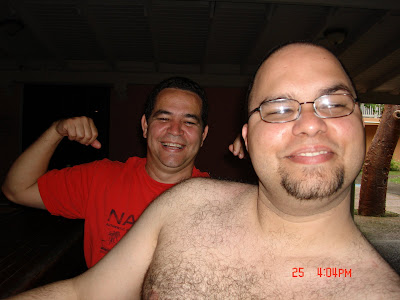 1. If you were trapped on a desert island for eternity with no possibility of rescue and could choose to have with you:
a. 5 books
Kasparov's Predeccessors books... they are the best books in the history of the game
b. 5 albums
I enjoy R&B music... soul and Jazz so I would say Lionel Richie stuff, Ray Charles,Kenny G, Andrea Boccelli etc
c. 1 chess player
Kasparov
d. 1 member of the USCF executive board and
Szuza Polgar..... I will support her in anything she does as I think she is trying very hard for chess to be recognized
e. 1 luxury item,
a laptop with a wireless card
What would you choose? (The island already contains a chessboard and clock)

2. Who are your favorite and least favorite USCL opponents and why? (You may answer individuals and/or teams)
I love playing against San Francisco as all the guys in the teams I consider to be good friends of mine and is nice to play nice people like them whether you win or lose. I hate playing against Tennessee Tempo's since we are always expected to win even in our worst year in the USCL's history and I really don't enjoy putting up with this kid Andrews comments whether he does well or bad... always talks some non-sense
3. If you had to play for a different USCL team, which would it be and why?
Miami again.... I am very much in love with my city!!... and we all get along great in the team
4. Describe your preparations for USCL games, including, but not limited to: opening preparation, pre-game superstitions, and interactions with teammates.
Well we don't do a whole lot of preparations since most of us or all of us work in different fields etc... so we don't get so much time... sometimes over the phone we discuss things (ex: Becerra, Blas and myself are in touch on the daily basis as we are like best friends) we all share Becerra's files which by the way when they go on ebay they should be kind of expensive!!) Gilberto Luna been the team manager is been great as he is also in charge of bringing us red bull and ice cream from the gas station next to the club while we play
5. If you could choose the next USCL expansion team, which city would you choose, which players would you draft, and why?
Los Angeles since I get along with armenians great... and they have GM's Akobian Kachiyan and former buddy of mine who was very interested on playing given the right time Harutyan Akopyan

6. Which are your top five chess-related websites and why?
chessbase.com chesscafe.com e3e5.com crestbook.com www.uschess.org
7. Are there any openings that give you special pleasure to either play or play against?
I guess pleasure comes to me thru any opening as long as I feel I played well whether I win or lose
8. If you had to pick name on type of ending that you are especially good at, what would it be?
None since I suck at chess period
9. Do you dream about chess, and if so, describe a dream you’ve had.
When I was young I always dreamed of representing my country (Cuba or USA later on) in the World Juniors Championships and even when I won the US Junior Championships in 1999 I was not allowed to do so which was the biggest dissapointment in my life overall uptodate
10. If Bill Gates gave you $500,000 to organize a chess tournament
a. where would you hold it,
Miami
b. what format would you choose,
Open
c. who would you invite, and
Kasparov
d. what, if any, special rules would you impose?
None.. leave chess the way it is!
11. How obsessed are you with chess? In an average week, how much do you study, play and think about chess? If you could choose to be more or less obsessed, would you choose either and to what extent?

I love chess.. I wish I could do it all day all night.... unluckily circumstances do not allow me to do so..... It is kind of difficult for me to talk about an average week since due to work it changes constantly... I am out on the street all day long... driving.. visiting stores (I am in charge of the Wine Division of my company Gold Coast Beverage Distributors in the county I live so I have a lot of responsabilities when it comes to sales) I don't get to play period.... if I play 3 tournaments in a year I can consider myself lucky since due to the vacation time I am allowed at work I can only dedicate to chess so much... ( I have a wife... family etc.. they also should get some of my time don't u think?) But I would definitly like to be more obsessed.
12. In recent years, a number of prose books about the chess world have been published. Have you read any of the following and, if so, what did you think: The Day Kasparov Quit (Dirk Jan ten Geuzendam), Chess Bitch (Jennifer Shahade), The Chess Artist (J. C. Hallman), Kings of New York (Michael Weinreb), The Art of Learning (Josh Waitzkin), King’s Gambit (Paul Hoffman), Engaging Pieces (Howard Goldowsky), How Life Imitates Chess (Gary Kasparov)?
The day Kasparov quit chess I enjoyed since all these interviews allow u to draw some conclusions about chess and chess players and the author is awesome.... I always look up to him.... his writing style is awesome.... a little bit short of the "dream team" (Jenn,Liz,Greg) but not bad at all

13. Of all your games this year, which are you proudest of?
vs Zilberstein last week since Becerra prepared me for it a week in advance as we knew he was going to go for this some time. It was all preparation till move 28!!
Gilberto Luna as team manager chooses the line-up checking on our availability but u know sometimes to do work issuess of different people we have to get penalized badly because of last minute changes
15. In your earlier match this season, Dallas beat Miami. What are your plans to make sure this does not happen again?
I don't really care about what happened earlier.... we are going to put up a fight and expect to be victorious.... I like this whole cinderella story idea.. coming from deep down under
16. Are there any lineups from Dallas you especially fear or want to see? They seem to play Boskovic and Kuljasevic pretty consistently; any special strategy for either of those two?
Not at all.... we will all try our best whether they line up Kasparov in the team
17. Were you surprised Dallas agreed to postpone your match?
It was nice from them but that also allowed them to make up a bit stronger team especially in board 4 where I think we have the edge regardless
18. If you make it to the playoffs, how do you see your chances against Boston? What line up do you expect they would use?
We will see then... now we care about Dallas...
Posted by Elizabeth Vicary at 11:24 PM